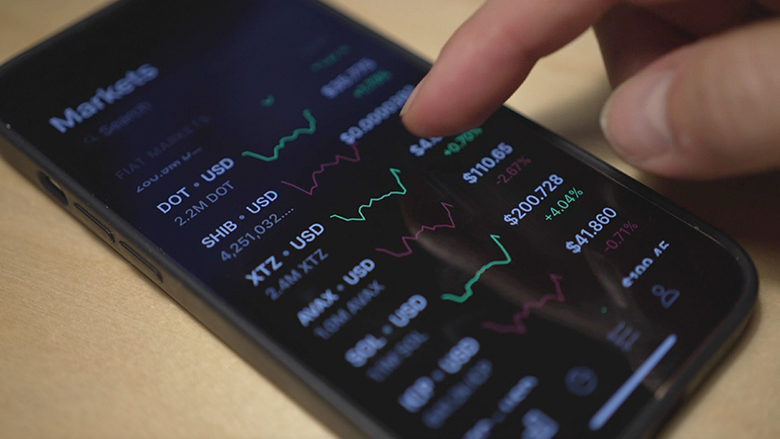 Suddenly you see them everywhere: cryptocurrencies. Marketing campaigns are displayed along the highway, at train stations and at the football stadium. Strict advertising rules apply to traditional investment; not to crypto.

The number of crypto-related ads has increased significantly in recent years. No fewer than 33,000 crypto commercials were seen on radio and television last year, compared to about 5,300 in 2017, the NRC reports. Crypto has become an indispensable part of the football stadium in a short time. Almost all major clubs in the Eredivisie have signed a sponsorship deal with a crypto company.

In December 2021, FC Twente entered into a sponsorship agreement with the cryptocurrency Floki. The so-called ‘memecoin’ is named after Elon Musk’s dog. “It’s special that football clubs do this because it exposes their supporters to danger,” said BNR journalist Aaron Loupatty.

At FC Groningen, a crypto sponsorship agreement previously went wrong. The crypto company IQONIQ is said to be creating a fan platform for the football team. However, this never happened and the crypto business is now bankrupt. The football club informs Radar that the agreement would not be crypto-related. “What we have also tried to make clear to the other media is that our partnership was based on fan engagement (unique content), made by FC Groningen’s media team and not on crypto,” said a spokesman for FC Groningen.

Complaints about crypto as a partner

Complaints have been received by the Advertising Code Committee about a message on FC Twente’s website announcing that Floki is the football club’s new partner. Part of the complaint is that FC Twente does not point out to its supporters the risks associated with investing in cryptocurrencies. The complaint was rejected because cryptocurrencies are generally not considered financial products or services and therefore fall outside the scope of the Financial Supervision Act (Wft) and the supervision of the Dutch Financial Markets Authority.

Crypto ads are not bound by rules

Since crypto is not regulated, crypto ads do not have to comply with the strict rules that apply to investment ads. At the end of last year, for example, the advertising campaign for the cryptocurrency Floki was shown on trams at RET, GVB and at NS stations without warning of risks. ‘They use special texts like’ missed Bitcoin, buy Floki ‘and thus they really respond to the feeling of fear of missing out on especially young people,’ says Loupatty.

RET says in an official response: ‘We follow the advertising code committee in our policy. In addition, we do not allow expression with nude pictures, sex, drugs and – a completely different category – of political parties. ‘

Stricter enforcement in other countries

The advertising campaign for Floki was also shown in the United Kingdom. It is precisely because of these texts that the British advertising watchdog, the Advertising Standards Authority (ASA), decided that the campaign was banned and had to stop.

In Spain, there have been stricter rules for crypto ads since February 2022. Ads intended to reach more than 100,000 people are pre-checked by the Comisión Nacional del Mercado de Valores or the Spanish Financial Markets Authority (AFM). The publication must be announced at least ten days in advance, and if this does not happen, a fine of up to 300,000 euros will follow. It is also mandatory to mention the risks of investing in cryptocurrencies. These rules also apply to influencers who promote cryptocurrencies.

Read the full answer from the Ministry of Finance here

AFM informs Radar that it actively monitors developments and practices in the crypto market.

‘It may differ from EU Member State to whether, prior to the entry into force of MICA, legislation has been introduced restricting advertising for cryptocurrencies. It is the legislator’s discretion, not the AFM ‘.