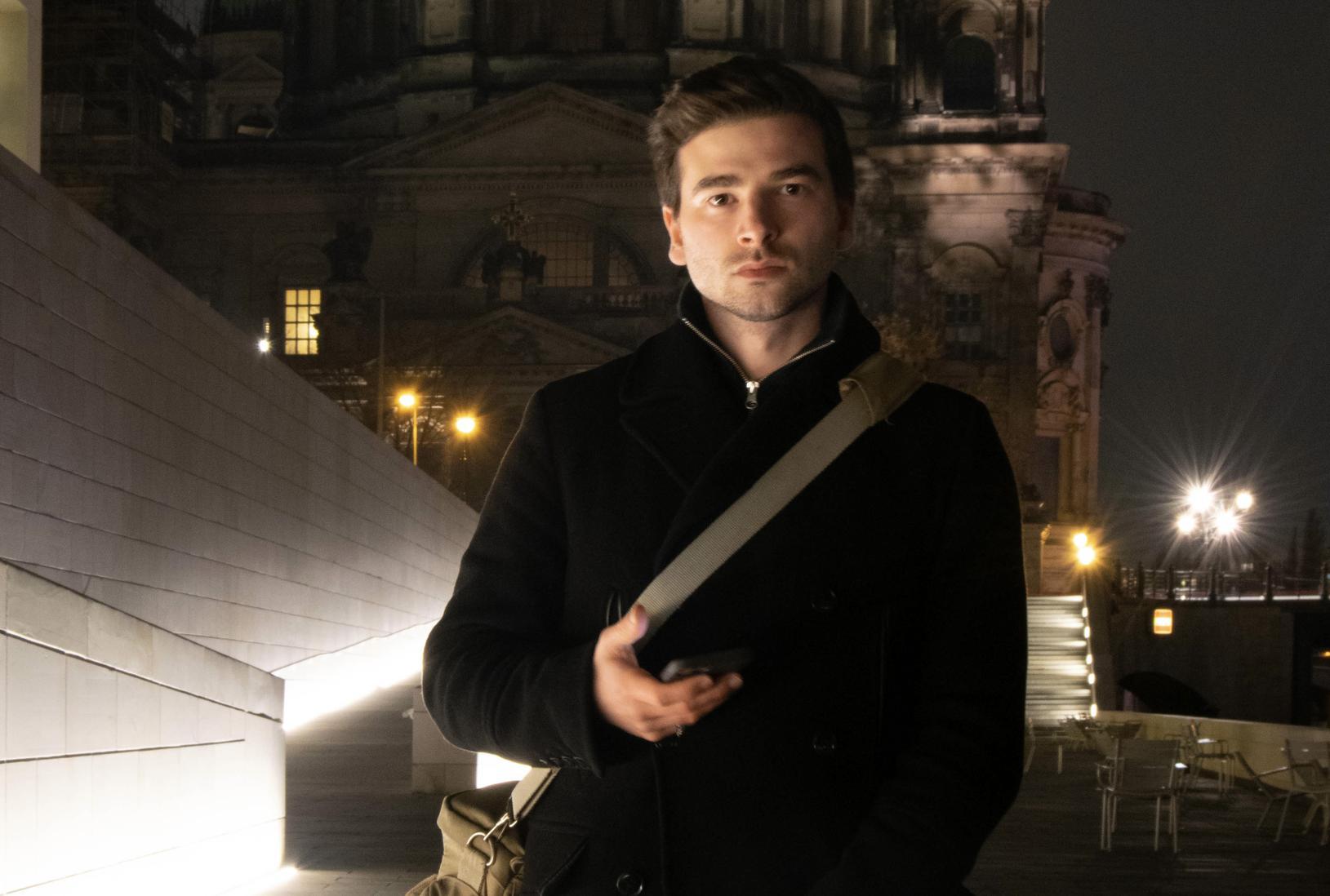 Shiran Potié (24) and three former fellow students have won the Young Architects Competition with the design of a sustainable and innovative farm in Ghana. These days, this Bruges architect is sitting at the drawing board in Berlin, designing football stadiums.

In this series, we let a ‘Brugse Beer’ speak every week, a man or woman who excels in what he or she does.

Despite his young age, Bruggeling Shiran Potié has already won two major international architecture awards. Together with three friends, fellow students at Ghent University, he can call himself the winner of the Young Architect Competition and the Manni Group Design Award.

Has this former student from primary school De Springplank and van de Frères ever dreamed that he would live in Berlin in 2022 and work for the renowned group GMP Architekten?

“No, to be honest not,” admits Shiran Potié. “Even though I already knew during my youth education at the Sint-Fancis-Xaverius Institute that I wanted to study architecture. A few years ago, we went on a study trip to Berlin with Ghent University to admire modern architecture. “

“I was so impressed by the Berliner Philharmonie, a concert hall designed by Hans Sharoen, and by the Kaiser-Wilhelm Gedächtniskirche. This church was badly damaged during World War II and got a modern bell tower after the war. The church building is located on Breitscheidplatz, not far from the Schöneberg district, where I now live in an apartment. ”

“After I got my master’s degree last summer, I wanted to go abroad. After two years of corona, I wanted to spread my wings. I applied for architectural firms in several European cities. ”

“The GMP Architect in Berlin was interested, I sent them my portfolio and they were accepted! It is a large architectural firm active in several countries. The Berlin office employs 200 people, I’m the only Belgian! I have lived and worked in the German capital since October 2021. ”

“I now take evening classes in German, but fortunately I already knew that language a bit. My grandmother Andrea De Gieter was born in Germany and has already familiarized me with Goethe’s language in the past. Together with my grandfather, who lives in a care center, she is the only family member in Bruges. My mother Frederike Potié has moved to France, I have never known my father. ”

“I had hoped that I could help GMP Architecten design the new Club Brugge stadium. Because I’m a big fan of Blauw-Zwart and was in the club’s football school before I was transferred to Varsenare. ”

The GMP Architect had applied for the Club Stadium, but unfortunately did not get the contract. However, my employer has a lot of experience in building football temples. It has built several stadiums for the World Cup in Brazil, the new Bernabeu Stadium in Madrid is by the GMP Architect, and so is the new roof of the Olympic Stadium in Berlin. ”

“And right after an international architectural competition, we were given the task of designing a new stadium in Saudi Arabia!”

Earlier this year, Shiran Potié himself successfully participated in the Young Architect Competition with three friends, former fellow students at Ghent University (Arno Goedefroo, Maurice Demeyer and Robin Feys). “There were graduates from 83 different countries and we won this competition! On top of that, our design resulted in the Manni Group Design Award. The good thing is that we have finished our plans from a distance. Because I was already in Berlin when we realized our project. ”

“The task was to create an innovative agricultural hub for Ghana. A sustainable project to provide a solution to the food crisis. In Ghana, agriculture is cultivated in a not very efficient way. The government wants to train local farmers to make everything better. ”

“An additional task was that in our project we had to integrate modern materials, such as steel, into the traditional African environment. Because Manni Group, which helped organize the competition, is a steelmaker looking for innovative solutions and applications. ”

“I think the jury, led by the Portuguese architect Eduardo Souto de Moura, the designer of the brand new BMCC in Bruges, was particularly charmed by the roof of our building. We referred to the ‘golden chair’, a sacred symbol in Ghana, from which the locals draw strength. “

Shiran Potié is now fully established in Berlin: “A very nice city, even though the scale here is ten times larger than Bruges. Every day you can discover something new here. The cool thing is the coziness of the open space, especially now in the spring. You have many parks and sports fields here. Everyone meets there, it’s a nice stroll. In addition, Berliners have an ‘open mind’. Everything is possible and allowed here. The only downside is the expensive housing … “

Shiran PotiePrivateBorn on April 27, 1998 in Bruges. Grandson of Andrea De Gieter and son of Frederike Potié. Lives in Berlin since October 2021.CareerWent to school in De Springplank and at Frères. Master of Architecture at Ghent University. Has worked as an architect at GMP Architekten in Berlin since last autumn.HobbiesFootball and photography.