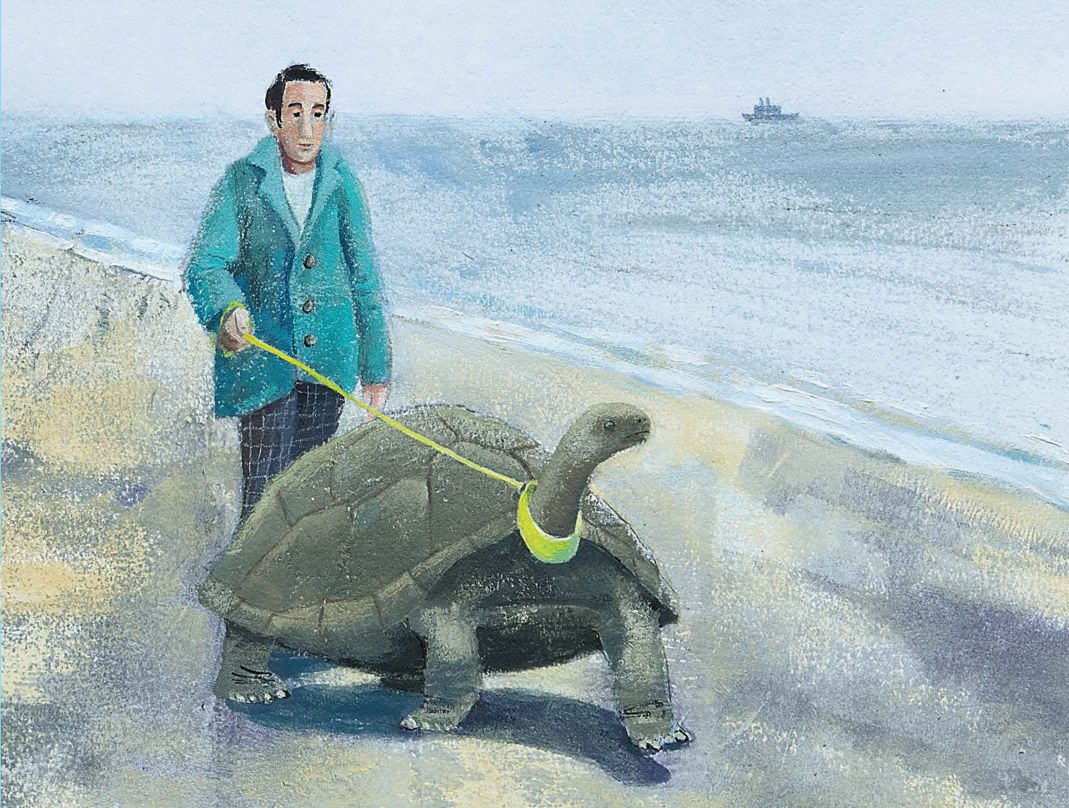 Without Turtle, I turned out to be nobody

The surreal look front of Turtle and me immediately attracts attention: In an almost impressionistic landscape, a man with a turtle walks on a leash, almost as if he were just walking a dog. The sober color palette and calm decor give the cover an intimate character, and this is exactly the atmosphere Marit Törnqvist manages to preserve in her new book.

Turtle and me is based on a strong image: an ‘almost’ five-year-old boy would like to hear the story of the turtle from his grandfather again. In capital letters, yes, because the pet is considered a full-fledged family member. Through a richly detailed flashback, Grandpa tells of his encounter with Turtle and then of the disturbing effect this unusual pet would have on his life. The accompanying print depicts the loving relationship between grandfather and grandson; for the attentive reader, Törnqvist has added some meaningful details. 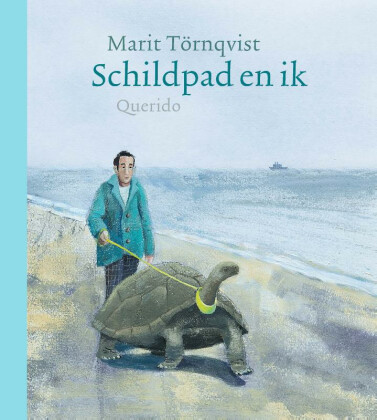 Grandfather got – even at the age of five – a turtle from his grandfather. A unique bond quickly developed between the child and its remarkable pet, which got the youthful protagonist with a weighty promise: ‘Turtle would always be with me! All my life.’ This is beautifully reflected in a disarming print of a football match where the main character acts as the goalkeeper and Turtle – tied to a goal post – watches. When the boy is first praised by family, friends and classmates because of his pet, this picture gradually changes: the duo are even treated as pariahs. This assumes a strong visual form: the boy and the turtle are, so to speak, exhibited on the playground in a ‘pen’ surrounded by pink chalk lines. The connection between the boy and his social environment is gone; Turtle literally and figuratively forms a shield against the world. Striking in the prints is fellow human beings’ often curious, somewhat complacent reaction, whereby no attempt is made at all to get to know Turtle and / or the main character in their uniqueness. Admittedly, it gives the story (too) few opportunities for. Törnqvist focuses strongly on the unique bond between the boy and his extraordinary pet, but makes little sense to this friendship. You can see how the main character pulls his turtle everywhere, but the striking relationship between the two deserved more depth.

Both in word and image, the desolation of the two is a moving fact, which is almost captured in poetic sentences:

But the two of them were disappointing.
A turtle does not say much.
†
I pondered and brooded until I was sure.
Turtle and I had to divorce.
It was no longer connected.

The solution quickly turns out to be found: the boy – meanwhile transformed into a man – wants to bring Turtle back to ‘my grandfather’s homeland’. Precisely the distance between the two makes it possible to reflect deeply on the extraordinary bond with Turtle: ‘Without Turtle, I turned out to be nobody. I was not even myself ‘. A sober print shows the inner division; the gray veined image zooms in on the man, trapped in a rainstorm walking with a dog. As the man travels back to his native land, he is happily reunited with Tortoise, who is smartly associated with finding the great love. Thus the three of them travel home: ‘Our happy all days could begin.’ When death appears years later, this again results in an atmospheric, sensitive print in shades of gray announcing the near end.

In the final scene, the author connects meaningfully with his first print and creates a rich and layered story of life and death, to love and let go, to travel and come home. Sometimes in effervescent, colorful prints, then again in still images with a blurred background. Stylistically falling Turtle and me on because of the almost plain text on; Törnqvist rarely uses a word too much. Sometimes the text is still a bit too descriptive, or the author repeats it, as the prints already make visible, but usually word and image form a successful alliance, which once again confirms Törnqvist’s status as a double talent, and it is given to only a few. .

Turtle and me deals with both individual and universal themes, in word and image. Almost automatically, a unique gem is created that invites reading and rereading and therefore deserves a wide and diverse readership.