Our bridges and tunnels are on their last legs. Never before has the Dutch infrastructure faced such an extensive replacement and maintenance task. Engineering companies have joined forces, because everyone agrees: if we do not tackle it jointly and effectively, it will never work.

Nearly a quarter of a million cars drive over it every day. About 140,000 ships pass through it each year; It is open 150 times a year for more than a quarter of an hour. The Van Brienenoord Bridge in Rotterdam is one of the busiest traffic jams in the country.

But this icon is now old and old is coming with errors. Here and there fatigue cracks become visible, the chance of a malfunction increases. The engineers of the Rijkswaterstaat made their calculations and came to the conclusion that the end of its service life was approaching. They decided to thoroughly renovate what is perhaps the most famous bridge in the Netherlands. Preparations are now in full swing and work will start in 2025, which will take several years.

The Van Brienenoord bridge is by no means an exception, as the aging of the large infrastructure is rapidly increasing. Across the country, one can identify bridges and viaducts that need major maintenance, renovation or even complete replacement. The ‘Baby Boomer Bridges’ were mentioned by Cora van Nieuwenhuizen as Minister of Infrastructure and Water Management last summer, referring to the post-war generation. “Like many baby boomers from the era who underwent cataract surgery or a new knee, that’s what’s happening to our bridges now,” she explained.

But what does such a gray star operation look like on an old bridge? How to replace a knee on a viaduct at an age? Is there sufficient knowledge internally for this and how do we find sufficient manpower? How do we decide which of the countless patients takes precedence over the others?

Can we possibly still prevent the ailments by making a timely diagnosis using the latest technology? Not only the whole sector is now preoccupied with these issues, but also politicians.

“Yes, we’re talking about an icon here,” said Roy Stroeve of Rijkswaterstaat. He is the project manager for the renovation of the Van Brienenoord bridge. This national exhibit is just one of many infrastructure projects within the overall replacement and renovation program that Rijkswaterstaat has launched.

In South Holland alone, more than ten large tunnels and bridges will be inspected in the coming years. The numbers are much higher throughout the Netherlands: from locks to quay walls and from traffic hubs to railway ramparts.

The annual cost of the program was estimated at about 2.5 billion. EUR before the increase in land and fuel prices. The TNO once estimated that it would cost 16 billion euros to replace just the 3,700 bridges and viaducts managed by the Rijkswaterstaat. Anyone who realizes that the municipalities and provinces manage a multiple of this will immediately see that the overall maintenance task is huge.

The service life has been exceeded

Most of the tunnels and bridges were built after World War II until the 1980s. This means that at least for the oldest works of art, the end of at least the theoretical lifespan is fast approaching or has already been exceeded. But there is more to the overall maintenance and replacement task.

The changing use of infrastructure is also crucial. Traffic has become much heavier over the last 60 years, and there are now eight times as many vehicles on the roads as in the sixties, to name two examples. In addition, we now look very differently at climate, sustainability, mobility and energy – all themes that play a role in this complex task.

Adaptive and modular
The maintenance backlog of the infrastructure is getting so big that it’s time to change things up a bit. Marcel Hertogh, professor of integrated design and management at TU Delft, therefore prefers the approach to extensive, delayed maintenance as a change task.

It is a big task, but it also provides opportunities. ‘Once it was about the technical state of a work of art, now it has become a dynamic and integrated subject because a bridge or tunnel must also become circular and climate-safe and serve biodiversity.’

According to the professor, adaptive and modular building provide perspective. ‘A storm surge barrier now works up to a certain water level. If the water rises further, a new one must come. Wouldn’t it be better to build a barrier that can meet the requirements? ‘ He points to IJmuiden for another example. ‘This is where the biggest lock in the world will be located in the next hundred years. There is always a lot of salt water entering the canal. It could also have been made adaptive. ‘

In the meantime, Hertogh is in favor of establishing learning processes and continuously actively stimulating innovation. ‘Bridges and tunnels are similar, there is very repetitive work involved in the renovation. If I were Minister, I would say: every next bridge and every next tunnel needs to be completed faster and for less money. This is how you force parties to renew themselves’.

‘We occasionally do a strength calculation for older works of art,’ says Stroeve, project manager for Rijkswaterstaat since 2018. The Van Brienenoord bridge is still strong enough, but is now becoming obsolete. Stroeve: ‘It is an additional reason why we are counting on whether the whole still lives up to the safety standards.’

The bridge consists of two arch bridges with a span of three hundred meters, plus a moving part. With a total of twelve lanes, the bridge is one of the most important traffic arteries in South Holland. “Fatigue cracks are now visible in the steel,” Stroeve says.

It may sound serious, but it is certainly not a reason for urgent action. ‘Based on the knowledge we have gained from other bridges, we can quite well calculate how these cracks develop, also with the predicted specific volume of traffic here.’ The cracks will especially grow in the right lane, with the heaviest freight traffic. ‘At the moment there is no problem yet’, Stroeve emphasizes, ‘but we must prevent them from arising in a few years.’ 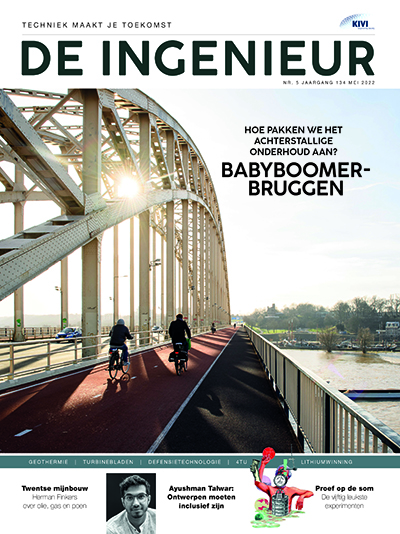 READ MORE ABOUT THE RENOVATION AND REPLACEMENT PROGRAM?

The whole story can be read in the May issue of The engineer† Buy the digital version for € 7.50, or buy – with a significant discount of 25% – a digital annual subscription of 12 issues for € 69.

If you found this article interesting, you can subscribe to our weekly newsletter for free.