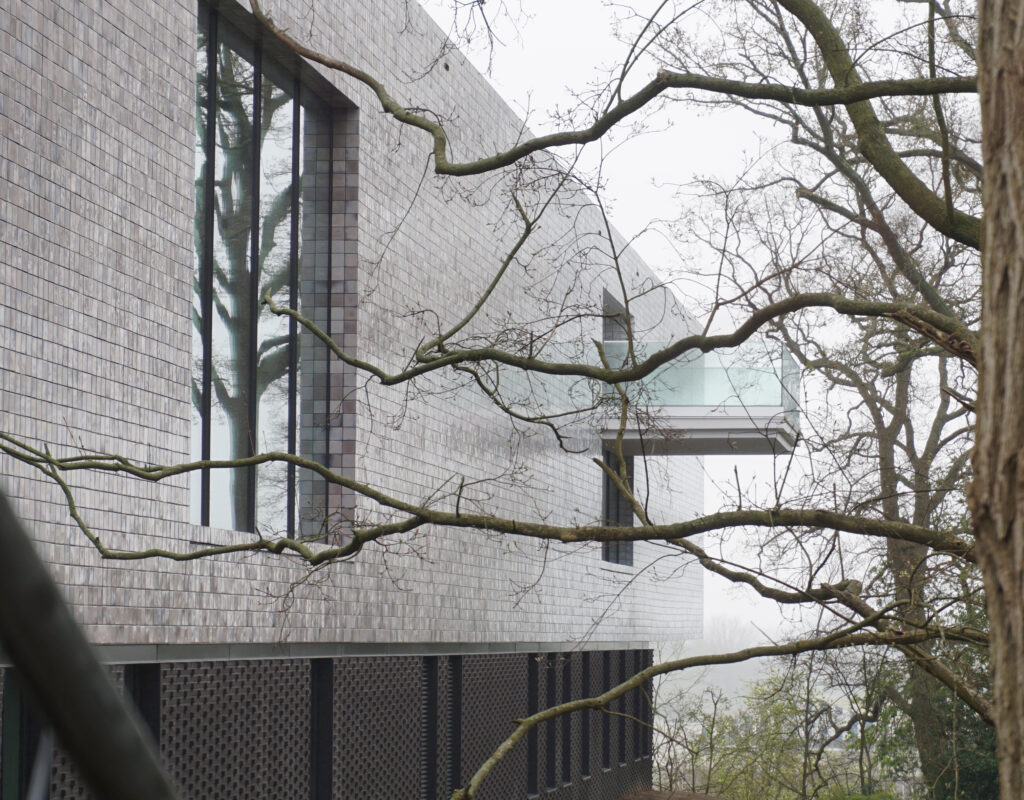 From 13 May 2022, Museum Arnhem can finally receive the public again, in a beautifully renovated and expanded building with a sculpture park. The dome of the old building has regained its former splendor and transparency. A new wing of 86 by 17 meters has been added, which protrudes beyond the moraine by no less than 14.4 meters. This wing has unique tiles in 14 shades, from earth brown to ice white. Inside, inward-facing museum spaces alternate with reflection spaces with phenomenal views of the surrounding nature.

Already in 2016, Arnhem municipality issued a tender for the selection of architects for the transformation of Museum Arnhem. Out of these, Benthem Crouwel Architects was chosen as the winner. Together with designer Pieters Bouwtechniek, the architects developed the design to specifications. At the beginning of 2018, there were no contractors willing to take on the construction within the budget. In 2019, an extra budget became available and the project was put on the market again. Out of five interested builders, the construction was awarded to the contractor Rots Bouw. The spectacular implementation of the special design started in February 2020 and was completed at the end of 2021.

Architect Joost Vos van Benthem Crouwel explains his design: “The collection of Museum Arnhem, the existing building and the location were the three starting points for our design. The spaces we have designed form a restrained neutral background for art. The oldest part of the existing building ensemble dates from 1873 and was designed as a men’s club by the architect Cornelis Outshoorn.It consisted of a central hall with dome and two wings, all overlooking the garden.In 1920 it was converted into a museum.Then the facades of the garden were closed to “The exhibition of the art collection. The cavity in the dome is also largely closed. The building changed from an extroverted community to an introverted museum.” Subsequent extensions include a west wing, added in 1956 by architect Frits Eschauzier, and a temporary wing built on the east side in 2000 after a drawing by architect Hubert-Jan Henket. Joost Vos continues: a height difference of about 20 meters.The museum is located towards the center of Arnhem and at the same time has a wide view of the river with the bridges and Betuwe. ” Based on these three starting points, Benthem Crouwel has drawn up a plan in which the old building has been restored and the wings from 1956 and 2000 have provided space for an entrance to the garden from the middle side and a new long west wing.

New wing with variety of art and landscape

An important aspect of the new wing is the division into three inward-facing parts with spaces between and next to them with sweeping views of the landscape. Vos: “We deliberately did not build the new premises in the moraine, but on top of it because of the phenomenal view. For example, in the new wing we have more than 1,000 m2 exhibition spaces and intermediate reflection spaces. The depot is underground in the moraine slope. This is a very suitable place for art storage because it is hardly affected by temperature fluctuations. Above this is a floor with workshops, expedition and offices. And over it again, on a par with the old building on Utrechtseweg, the new museum premises. We have designed that level with an alternation between three closed parts, where nothing distracts from the art, and in between two parts with floor-to-ceiling windows that offer a view of the landscape. ”

The much-loved view that the Rijnzaal used to offer is now double back: From the museum wing itself, but also from a public balcony, which can be reached via the garden, a staircase and a passage right through the museum wing. “On this balcony, you are one level higher and the views are even more overwhelming,” says Vos.

Color gradient in the facade from ice white to earth brown

The two-storey basement trough is clad on the outside with bricks as far as it protrudes above the moraine. Above this, the facades of the new wing are tiled all around with 82,000 unique tiles made by Koninklijke Tichelaar. The colors range from earth tones on the side of the Utrechtseweg to blue and ice white towards the Rhine, which refers to the transition between the Veluwe and the river landscape of the Betuwe. The tiles are unique due to the application of so-called lively glazes. There are 14 different shades and the color transition should be smooth. Here and there, the transition between two colors is now a little too hard, according to Joost Vos, who is still being adjusted. Tiles have also been laid under the eaves.

These overhangs are significant, 5.4 meters deep on the land side and 14.4 meters deep on the Rhine side. The total area of ​​the wing is 86 times 17 meters. Designer Chris Bosveld from Pieters Bouwtechniek has designed and elaborated the construction of the new wing from VO to the specifications. Bosveld about the constructive challenges of the design: “A main construction has been designed for free interior design, which consists of a two-layer basement trough of concrete in the slope of the moraine, with a construction above with load-bearing rafters in the facades so no intermediate columns are needed, and the large cantilever on the Rhine side could be made. Only above the large overhang is a steel roof plate in combination with skylights, which is used to limit the load on the rafters and to enable the daylight space. ” In the rest of the building, the roof is made of perforated sheets to accumulate heat and cold.

In addition to the new wing, the existing part with the monumental dome has also undergone a transformation. Originally, the dome was very open with a large cavity and slender cast iron columns on the ground floor and first floor. After the museum moved into the building, the transparency has disappeared due to the placement of walls and floors around and in the void. It has now been brought back, designer Chris Bosveld explains how: “During the current renovation, all the walls in the dome have been removed. The monumental cast iron columns on the 1st floor turned out to still stand there, which have been made visible again. A steel structure installed in 2006 turned out not to be connected to the existing columns, but to rest on a wall that was now going away. We imposed the steel structure from 2006 on the existing columns. By reducing the size of the circulation, the load could be carried by the old cast iron columns. ”
The vacuum has now been made more spacious and lighter than before the renovation. French doors have been made all the way around to the garden. Joost Vos: “As soon as you enter the museum, you have a view of the garden and the monumental red beech.”

In the bright spacious hexagonal hall is the museum shop and Café Pierre, named after the former director of the museum Pierre Janssen. The café is also accessible from the garden, including the spacious walkway on the floor where the museum will host activities.

In the garden, the wide staircase towards the new wing will also be used as a grandstand for events and activities. The design of the sculpture garden with winding paths is made by Karres and Brands. The dome hall and garden are publicly accessible and an asset for all residents and visitors to Arnhem. Admission is only required when entering the museum wings.

An article will be published in Bouwwereld on 13 May 2022 examining the structural design and implementation of the transformation of Museum Arnhem in more detail.