For four months, Rachel traveled in a van through southern Europe with Moze (5), Rumi (2), husband Karim and dog Reva. She learned to embrace discomfort and get into a flow.

“I thought in advance: this trip is going to be a dream. Because I thought we would have lots of time, I packed my yoga mat and a lot of books. Our kids would love it too, I expected because they had their parents around all the time. along the way.But the first two weeks turned out to be tougher than I had expected.

Being in a full-time van with two kids and a dog while it was still pretty cold was just intense. Moze also had homesickness, something I had not expected. She was already going to school, missing her friends and our neighbors; we live at home in a community, she has her own social life there. The first fight with Karim was about who could do the dishes, because it was a moment for yourself, then you were finally alone. 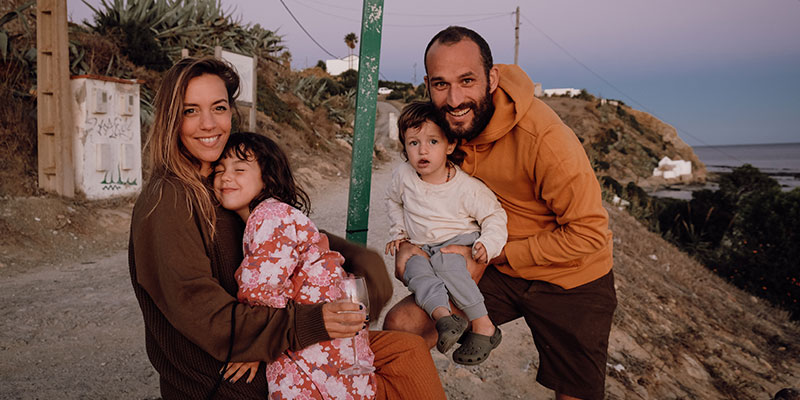 I quickly learned: life goes on in the bus, but in miniature. It just feels great because you can not leave. In ordinary life you can escape, get out for a while, but not here. So if something is difficult, fix it there.

After a week or two on the beach in southern Spain, we deliberately switched contacts. We let go, learned to accept bumps and embrace discomfort. That way we got more in flow and Moze became more calm. The trip became more and more the dream I was hoping for. 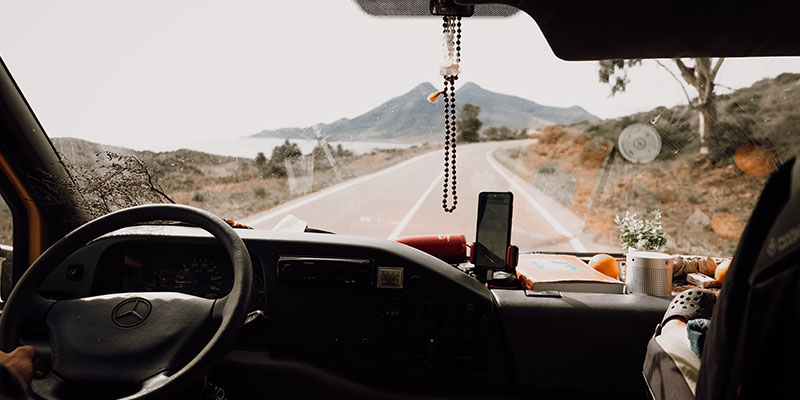 What also helped is that we are gradually getting used to the van. Because even though we’ve built it for seven weeks at home, we still had no feeling for it. You always had to put ten things aside to be able to achieve something and we cooked on two burners, while I, so to speak, prefer to make a five-course dinner.

But as our resistance dropped, we also got used to the bus, and I did it all step by step. And it got hotter, we could go outside more often. We still had to change ten things to get to something, but we knew that now, and it was not bad anymore.

It is good that we learned to let go, because along the way it became more and more clear that we would not reach our final destination Morocco due to stricter corona rules and a conflict between Spain and Morocco. In the kitesurfing town of Tarifa we even saw the land from the beach, but it was in lockdown, it really would not happen again. 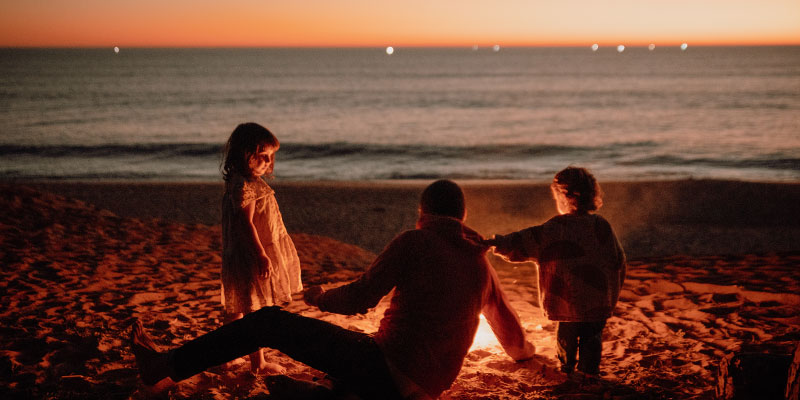 Camping in nature also helped us get into a good flow. In fact, you are not allowed to camp in nature in Spain and Portugal and we have sometimes been sent away. But because it was low season, it was not strictly controlled.

At a regular campsite, the first thing you see is a sign with rules, but here there was just space. It gave me an ultimate feeling of freedom but also intimacy with our family. We opened the door and went straight out to the beach to take a nude dip.

On a mountain in Spain, I felt it was right. The children were covered in dust and earth while making kites, further ahead some music was playing, wine was added, to our left was a town, the beach in front of us, the mountains behind us, where we walked very nicely. There I also noticed how little the kids actually need.

When we had to wash or shop, we moved on. Then we went to a nature campsite or to a town. For example, we had wonderful days in Barcelona; I fell completely in love with Spain. I like the noise there, the people on the street, the music, the paella and the tapas; it’s a passionate country, it’s busy.

In Granada we ate delicious food while the old men played guitar and sang beautifully. It was nine in the evening, it’s perfectly normal if you’re still there with your family. They just like it when you hang around while your kids tear down the tent.

Still, I noticed that cities cost me more effort. You can not just open the door and let your kids run. That is why we always went back to nature. 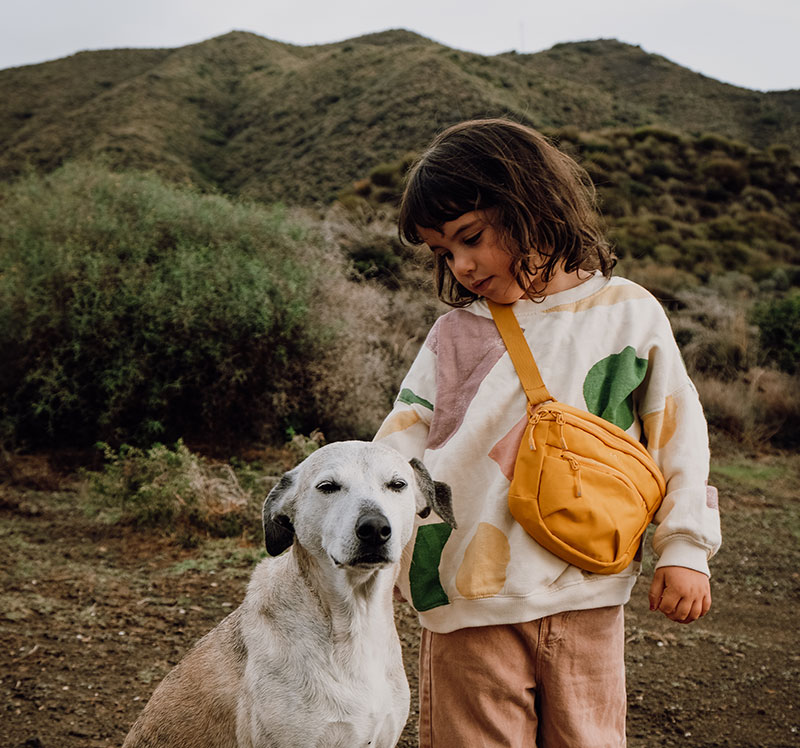 A place to land

We also encountered other traveling families along the way. It struck me that they were often looking for a place where they were happy to land. We did not have that feeling and it made us feel even more happy for our community in Oosterwold, which we call Bolderburen. When we got home, we felt it very clearly. But it also meant we ran back to daycare and forgot the papers, what time do we eat?

Our trip was a simplified version of life, it was so peaceful. And truly a dream come true. It has also been a valuable lesson: to take a step back every now and then, to sink down for a while and allow myself that simplicity again – also in this life. ” 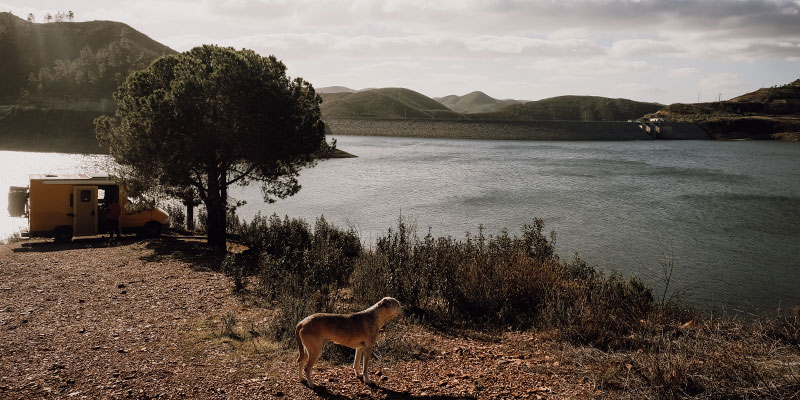 We sailed by boat from Barcelona to Ibiza, where you can walk very nicely, for example at Sant Joan de Labritja. Then you arrive at a bay where you can swim.

I have never seen such a well-kept zoo as Bioparc Fuengirola, south of Malaga.

Friday night there is Friday night Happiness Pizza Party near the Portuguese Monchique. Here you can stand with your van all night, dance and eat unlimited pizza. A bit like a mini festival.

I thought the town of Aljezur in the Algarve was a very nice place. Nearby are a few lovely surfing beaches, such as Monte Clerigo. 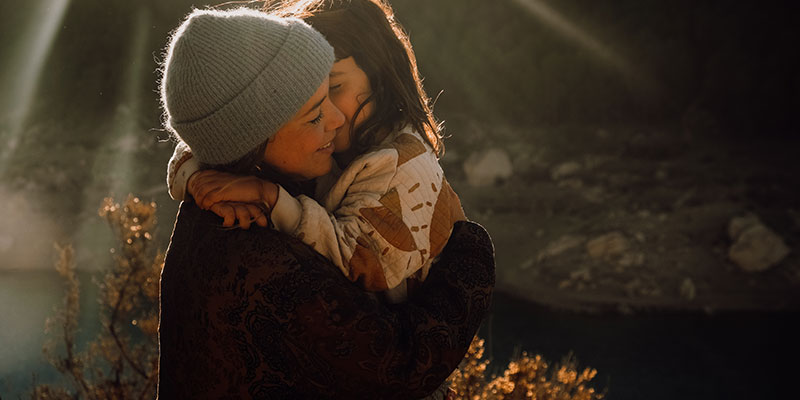 At Bar El Frances in Tarifa, I ate delicious pulpo.

Another must in Tarifa: restaurant Raizes. A little more luxurious food, but delicious, with super tasty wines.

The best paella I ate at El Carmen in Ibiza. An ideal place on the beach: we had a nice meal while the kids played in the sand. 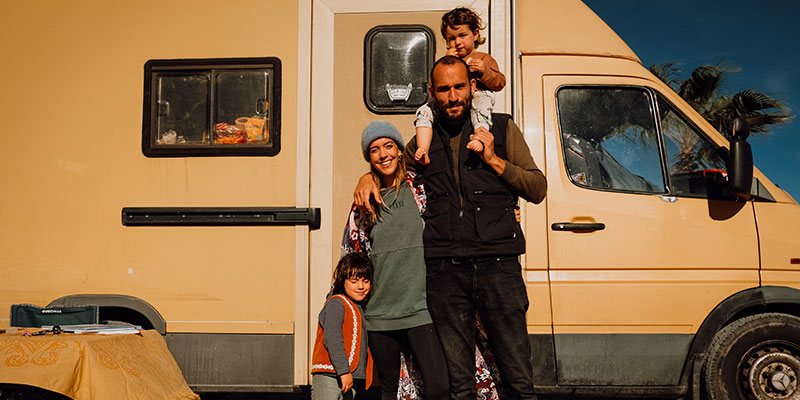 With the Park4Night app, we searched for suitable campsites in nature. Users can indicate where it is good to be or where you stand among the partying people.

In Spain, we stayed at a fine eco-campsite in Almonte, the Global Tribe Ecovillage, near the Portuguese border. It is also a community where many nice people live. You can sign up every day to attend the meal and they grow their own vegetables. 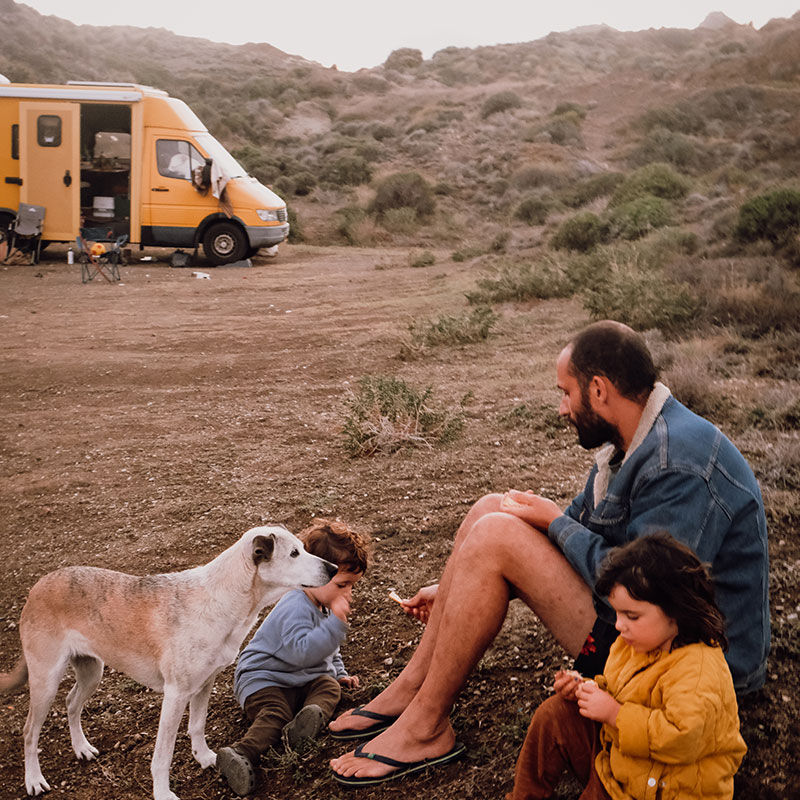 Read the best stories, most recognizable columns and the best tips for you and your kids every month. Subscribe now to Kek Mama and get up to 45% off.