The designers at Kia’s European Design Center in Frankfurt have redesigned the XCeed in several areas. The Kia XCeed has new LED headlights and a redesigned grille, front bumper and air intake. By integrating the fog lights into the headlights in their own way, the designers were able to mount air deflectors on each side that evenly direct the air around the car’s wheels to reduce air resistance and fuel consumption. 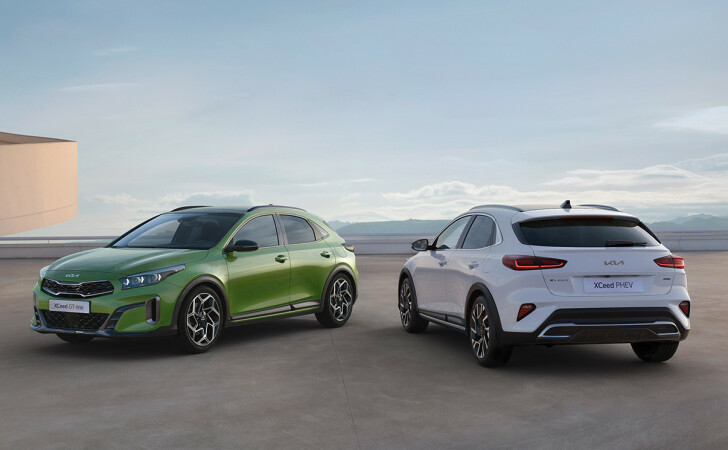 On the back, a new diffuser stands out with a glossy black sliding plate and a special ‘exhaust-look’ design. From the side, the XCeed’s relatively long bonnet subtly blends into the A-pillars behind the front wheels, giving the car a retracted silhouette. While the wheelbase is the same as other models in the Ceed series of 2,650 mm, the front and rear overhangs of the XCeed have been extended by 25 mm at the front (to 905 mm) and 60 mm at the rear (up to 840 mm). The only body panels transferred from the five-door hatchback are the front doors.

The fast sloping roofline leading to the sloping fastback tailgate enhances the dynamic look of this Kia. It is available with a choice of 16- or 18-inch machined alloy wheels with 205/60 R16 or 235/45 R18 tires.

The LED taillights emit a technical light signature that, seen from certain angles, appears to shoot forward in the car’s shoulders. Lines running horizontally across the tailgate and rear bumper give the new XCeed a wider and more stable look.

XCeed’s ground clearance is 172 mm on 16-inch wheels and 184 mm on 18-inch wheels, up to 44 mm more compared to the Ceed five-door hatchback. The wheel arch and the threshold, together with satin chrome roof rails, give the car a hard look.

In recent years, GT-Lines has been one of the most selected versions in the entire Kia series. XCeed is now also available in this extra dynamic version.

The new GT-Line offers a number of sporty details that set it apart from the other versions. The sporty lower air intake and side bumper trim in combination with the tiger nose grille give a more aggressive look. At the rear, the new hexagonal LED taillights stand out and a sporty lower diffuser painted in body color. The XCeed GT-Line sits on sleek, machined 18-inch alloy wheels for an athletic look, while body-colored door frames, glossy black roof rails and mirrors enhance its active and dynamic look.

The new Kia XCeed will be available in 12 exterior colors, depending on the trim chosen, including three new very distinctive colors: Lemon Splash, Celadon Spirit Green and Yuca Steel Gray.

The ‘floating’ infotainment system with touch screen is separate from the dashboard, while the lower part of the instrument panel offers a number of touch-sensitive buttons, knobs and switches for volume control, climate control and ventilation.

The 12.3-inch digital interactive instrument cluster in the new Kia XCeed has new graphics, and different display themes can be linked to the different driving modes. The glossy black panel around the gear lever and the new thin-edged rearview mirror are further improvements in both shape and function.

The interior is finished with soft materials, and the satin chrome dashboard enhances the luxurious feel. There is a choice of different upholstery materials, including suede, synthetic leather or genuine leather.

The new Kia XCeed is available with different powertrains. Three turbocharged direct-injection (T-GDi) petrol engines are available, starting with the three-cylinder 1.0 T-GDi with 120 hp and 172 Nm of torque and a four-cylinder 1.5 T-GDi with 160 hp and 253 Nm. The 1.6 T-GDi from Ceed and ProCeed GT is now also available for XCeed. With an output of 204 hp and a torque of 265 Nm over a wide speed range, the 1.6 T-GDi engine fits this crossover.

Kia’s crossover is also available as a plug-in hybrid (PHEV) that combines an 8.9 kWh lithium polymer battery pack with a 44.5 kW electric motor and the 1.6 ‘Kappa’ four-cylinder GDI engine paired with a six-speed dual-clutch gearbox (6DCT) . This variant provides 141 hp and 265 Nm and can theoretically drive 48 km fully electric (59 km in the city).

The Kia XCeed is the only model in the Ceed family to be equipped with hydraulic front rebound stops, which are fitted as standard on the front axle at all equipment levels. The rubber bump stop floats in hydraulic fluid in the shock absorbers, which should ensure a smooth ride over uneven surfaces. The car is designed to absorb even large shocks with a smooth and progressive response that prevents the body from jumping, as the suspension corrects itself after rapid compressions. It also contributes to a more responsive steering and better overall control, with the added benefit of reducing suspension noise over bumps. 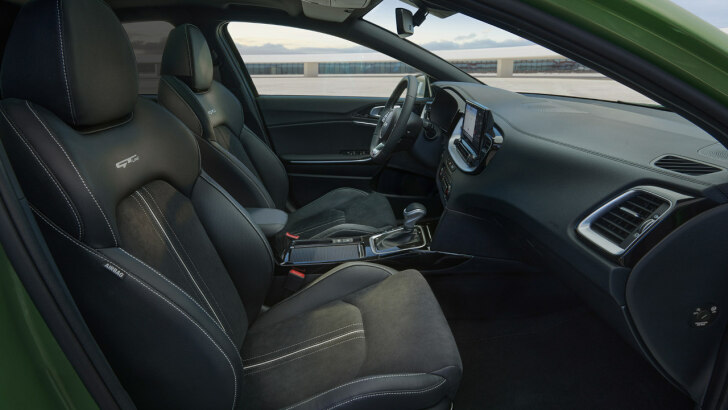 XCeed’s spring speed is 7% softer at the front and 4% softer at the rear to provide greater comfort and stability in all conditions, while a dynamic damper for the rear cross member further dampens road noise and structural vibrations while driving.

The electronic control unit (ECU) that controls the power steering motor has been set to provide a faster initial response to a steering angle. According to Kia, this ensures that motorists can enjoy fast steering reactions and less rolling. The power steering assist level provides a subtly easier overall steering to reduce driver fatigue on longer trips and at low speeds.

The new XCeed is equipped with the very latest infotainment, connectivity and security technologies from Kia. The 10.25-inch touchscreen navigation system has a Bluetooth multi-connection to connect two mobile devices at the same time, while Android Auto and Apple CarPlay are also standard.

The fully digital 12.3-inch digital interactive instrument cluster has new graphics and can be set in different themes depending on the selected driving mode. With new connectivity technology, third-party calendars can now also be integrated, allowing users to link their Google or Apple calendar to the infotainment system to ensure they never miss a deal. If a destination is stored in the calendar of a scheduled meeting, it can be automatically loaded into the navigation system.

The new XCeed also features the latest version of Kia Connect with Kia Live Services, a system that connects the driver and passengers with the outside world via the touch screen of the car or the Kia Connect app. Kia Connect uses its own eSIM card to retrieve and update live data while driving. Some examples of live services are traffic information, weather forecasts, points of interest and parking information (including price, location and availability of spaces). Kia Connect can also be used to plan trips in advance by sending navigation data to the car via smartphone. The app also allows XCeed drivers to locate their car, ideally in large parking garages or in unfamiliar surroundings.

With the latest variant of Kia Connect, up to two personal user profiles can be created. This feature allows users to back up their Kia Connect preferences to the cloud and transfer settings from one Kia to another. This is a useful feature for customers who frequently switch between different Kia Connect-equipped cars, such as pool car users or families with more than one Kia in their household.

Other (optional) amenities that increase comfort and enjoyment include a JBL Premium sound system with Clari-Fi technology, two-zone air conditioning, electrically heated side mirrors, heated steering wheel, heated and ventilated front seats and heated rear seats. The new XCeed has several USB-C ports on board, which can not only connect equipment but also charge quickly.

The updated Smart Cruise Control (SCC) now also works on the basis of navigation data. This navigation-assisted SCC (NSCC) includes an Auto-set function that automatically adjusts the march speed of the XCeed to the speed limit set for that road. This system also includes a curve function (NSCC-C), which uses the navigation data to predict an upcoming turn on the road, slows down the cruising speed if necessary to complete the turn as safely as possible, and then returns to the preset speed.

Kia’s Blind-spot Collision-Avoidance Assist (BCA) works hand in hand with Blind-spot Collision Warning (BCW). In conjunction with BCW’s audio and visual warnings, the system applies brake pressure to the wheels and returns the XCeed to its original lane.

Driver Attention Warning Plus (DAW +) is designed to protect all passengers and monitors the driver’s behavior to get to know his or her usual tendencies and driving patterns. The system gives warnings if it subsequently detects irregularities in driving behavior that may indicate fatigue or distraction in the driver. DAW + also provides an audible and visual warning if the vehicle in front moves away and the driver does not respond.

The Rear Cross-Traffic Collision-Avoidance Assist (RCCA) uses sensors in the rear bumper and a reversing camera to give the driver a better overview of what’s behind the XCeed when reversing. The sensors warn the driver of oncoming traffic to the left or right of the car, even before they appear. If the system detects a vehicle approaching rapidly, a warning bell sounds and an icon illuminates on both side mirrors to warn the driver that a collision is imminent. If the driver does not respond, the system brakes automatically to avoid a collision.

Available in the Netherlands from mid-September

The new Kia XCeed, like the other models in the Ceed family, was built at the production facility in Zilina, Slovakia. The first specimens are expected to arrive in the Netherlands in mid-September. This Kia crossover also comes standard with a seven-year or 150,000-kilometer warranty. The Dutch prices and specifications will be announced in the time leading up to the introduction.