Artillery, shooting ranges, dark green army trucks and helicopters – you won’t find them at the Kromhout Barracks in Utrecht. Instead, the large complex on the east side of the city is filled with offices that include meeting rooms, flexible workspaces and coffee corners. A unique location in the Armed Forces. Since 2010, three of the seven defense organizations have had their headquarters here. DUIC was given an exclusive tour by the barracks commander, Brigadier General Laurens Jobse.

Let’s start with a little history. Fort Vossegat used to be on the site where the Kromhout Barracks now stands. The fort was part of the new Dutch water line. In 1913, Kromhout Kazerne was opened on a piece of land behind the fort, named after Joachim Hendrik Kromhout, an important general of the water line. The original barracks existed until the 1990s, after which they were sold to Utrecht University, which now houses University College Utrecht.

The current barracks were commissioned in 2010. Here and there you can still find a trace of the past, but the image is determined by the sleek modern architecture. The complex is the first barracks built and run in collaboration with the private sector, and not just by the government or the defense itself. Design, construction, ongoing maintenance, management and facility services have been outsourced to the Komfort consortium until at least 2035. Komfort is a partnership between, among others, the construction companies Ballast Nedam and Strukton, investor John Laing and facility service provider ISS Nederland.

The headquarters of the Royal Netherlands Army, Defense Materiel Organization and Defense Support Command can be found spread across the offices at the barracks. This means that three of the seven defense headquarters are located in the Kromhout barracks. The Defense Materiel Organization deals with the purchase, development, maintenance and sale of all equipment from the Dutch armed forces, i.e. for the Royal Netherlands Army, Royal Air Force, Royal Netherlands Navy and Marechaussee. The Defense Support Command is responsible for medical examinations, logistics, security, infrastructure and officer training.

Today, together with General Jobse, we walk over the 19-hectare, predominantly green area. “The buildings around us are divided into two groups: K and V. The K is from the office. Together, these buildings provide almost 80,000 square meters of office space. 3,500 flexible workplaces have been created, where a total of approximately 5,600 people work.” Opposite the offices are the V, van Zorging buildings. “There is, among other things, the sports hall, the fitness room and the restaurant, which can accommodate 2,400 guests during lunch.” There is also a conference center and there are two hundred single rooms in the so-called ‘alloy’. “Colleagues who come from far away can spend the night here. Everything they need is in the room. They can also go to the bar for a drink.” 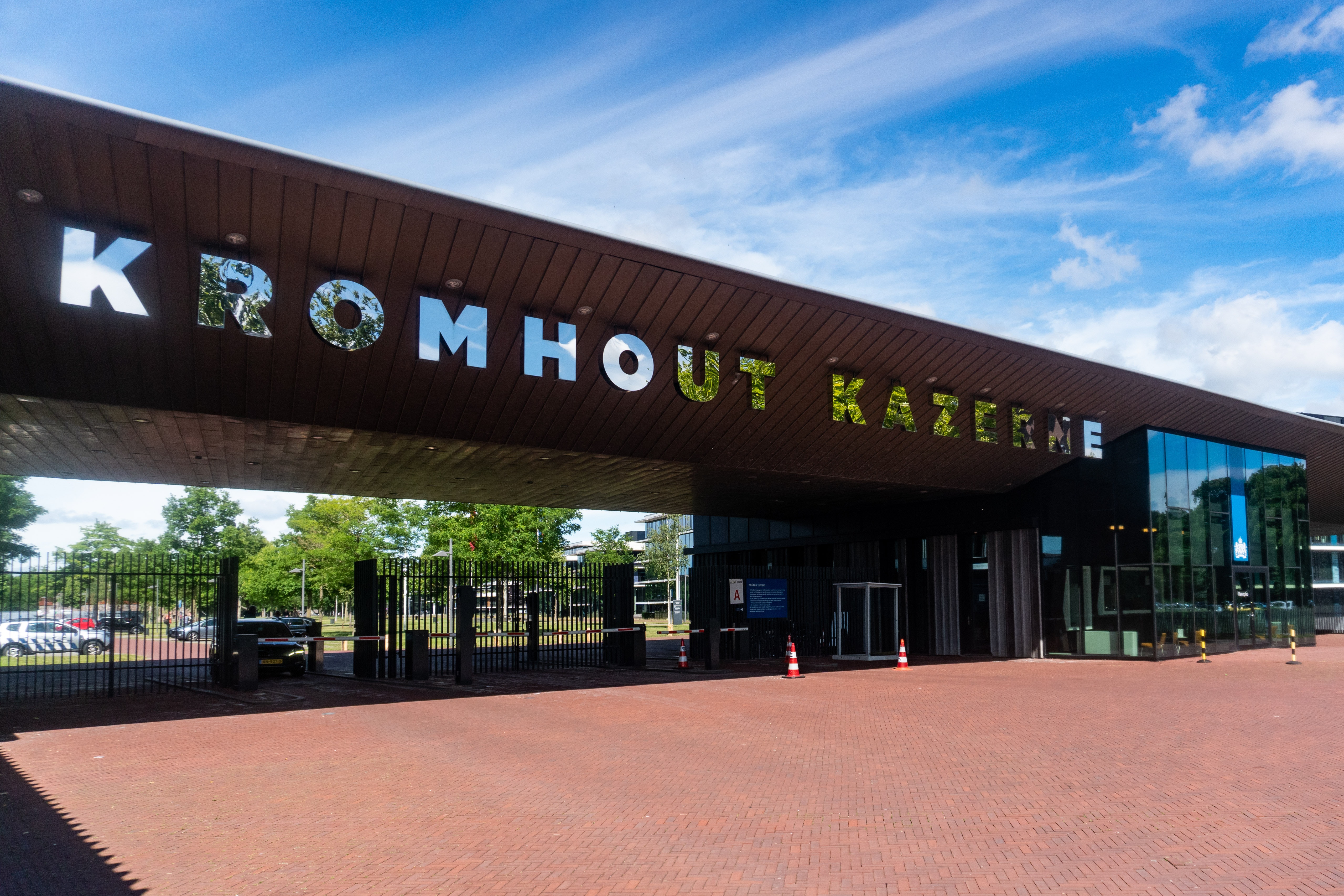 During the tour, General Jobse and colleagues greet each other kindly, almost amicably, with a joke here and there. A stark contrast to the images from American movies, of soldiers becoming alert when a superior walks by. “We haven’t done it that way in a long time.”

But just walking into the barracks is not an option. The barracks is divided into several security levels. DUIC came through the main entrance with a visitor’s pass. All permanent employees have their own passport, which gives access to certain parts of the barracks based on their function. “The main entrance is guarded by an external party that is special to the defense.” says Jobs. “It works well. We have our own armed people walking around the place who respond if an alarm goes off somewhere.” 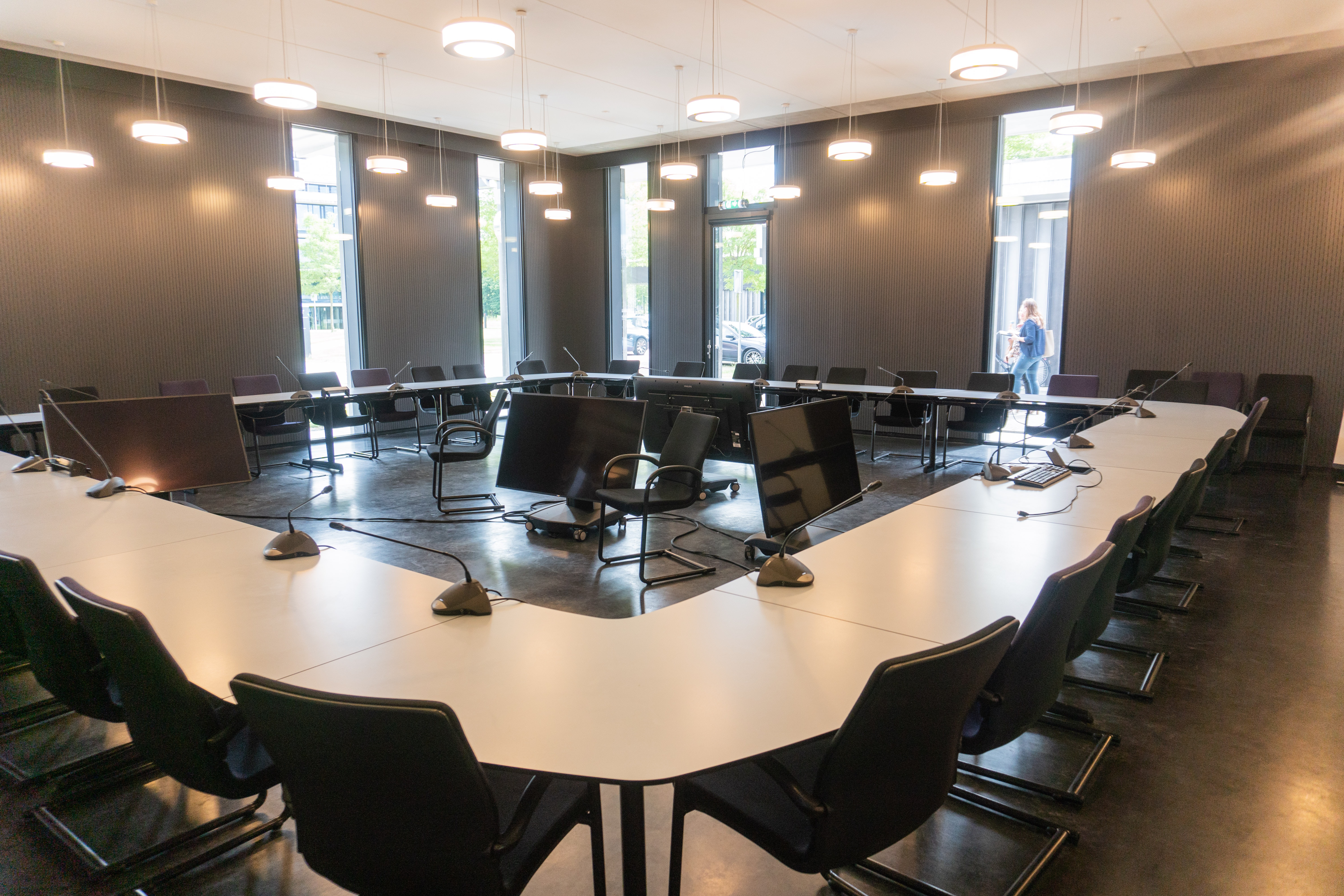 The highly secured areas are the so-called ‘classified areas’, where activities of a ‘vital nature’ take place, such as the operation centres. “There is 24/7 contact with the broadcast areas. The number of people who can access it is limited. And no, the local press doesn’t get to see it either,’ jokes the general.

In addition to the 1,500 parking spaces, which are also used by FC Utrecht at home matches, the barracks also has a small fleet of its own. No armored vehicles or jeeps, only gray midsize cars. “It is especially important that four people can sit comfortably in it. The cars are used for work visits. The first electric cars will arrive soon, for which a charging station has just been built.”

Sustainability has been a top priority since the first plans for the new Kromhout Kaserne. “There are solar panels on all the roofs.” says Jobse proudly. “When the sun shines, they yield as much as the barracks use. The materials used in the construction are also durable and easy to maintain. It’s a lovely place to work. Colleagues at other barracks are sometimes jealous of it.” 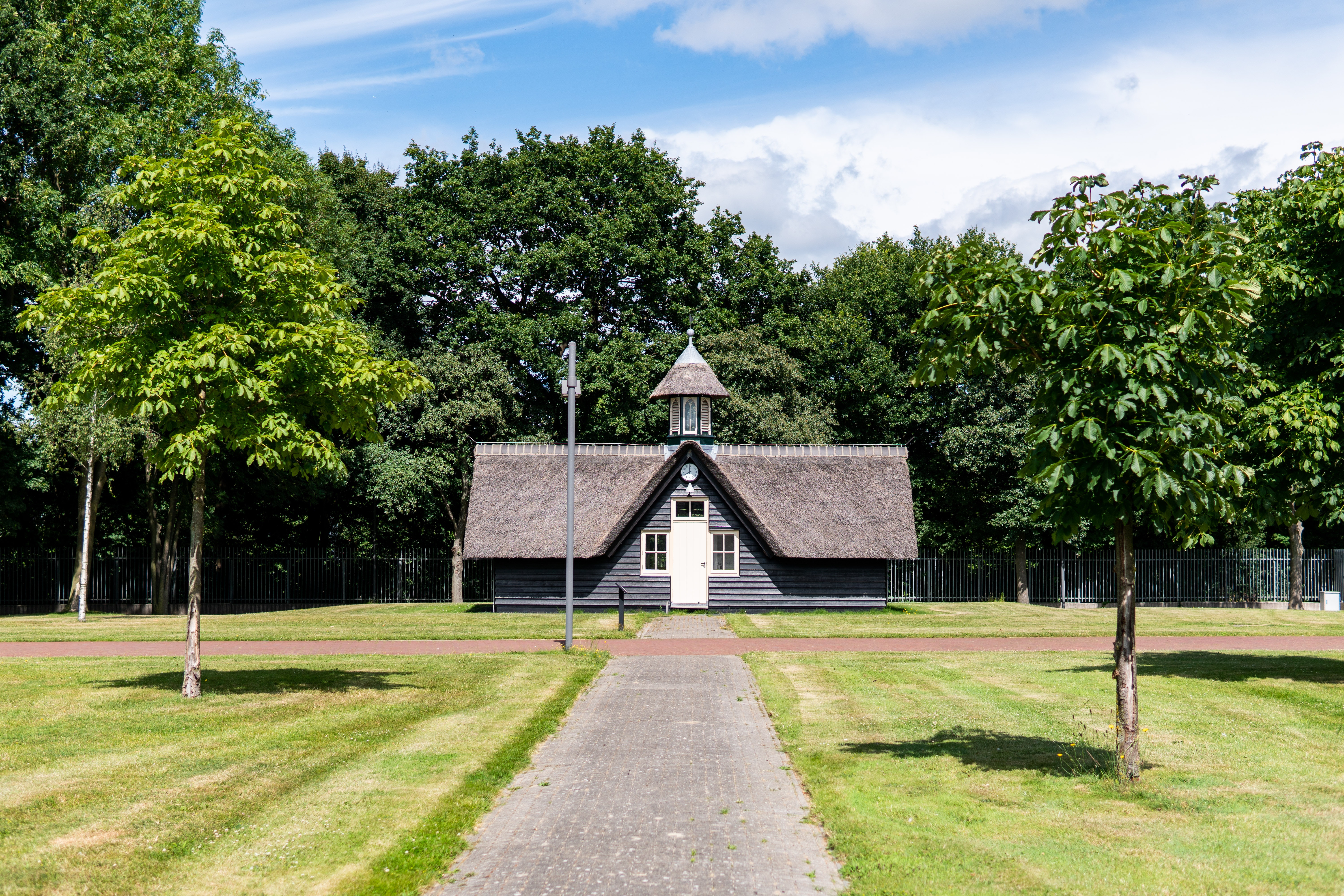 General Jobse visits the mayor of Utrecht twice a year. “As a large employer, you want to maintain a good relationship with the city. During corona, we also had contact with the Utrecht Science Park to spread the use of public transport in the region. Here, too, everyone who could, worked at home. All in all, it was around 80 per cent. Now we are pretty much back at the old level.”

The contact with FC Utrecht is also good. It is fine to make our parking available. The staff at the barracks regularly sit on the stands in Galgenwaard. You also don’t hear Jobse complaining about the neighbors on the other side, University College. “We have fixed points of contact with whom we stay in touch. Sometimes a beer bottle comes over the fence, but that’s it.’ 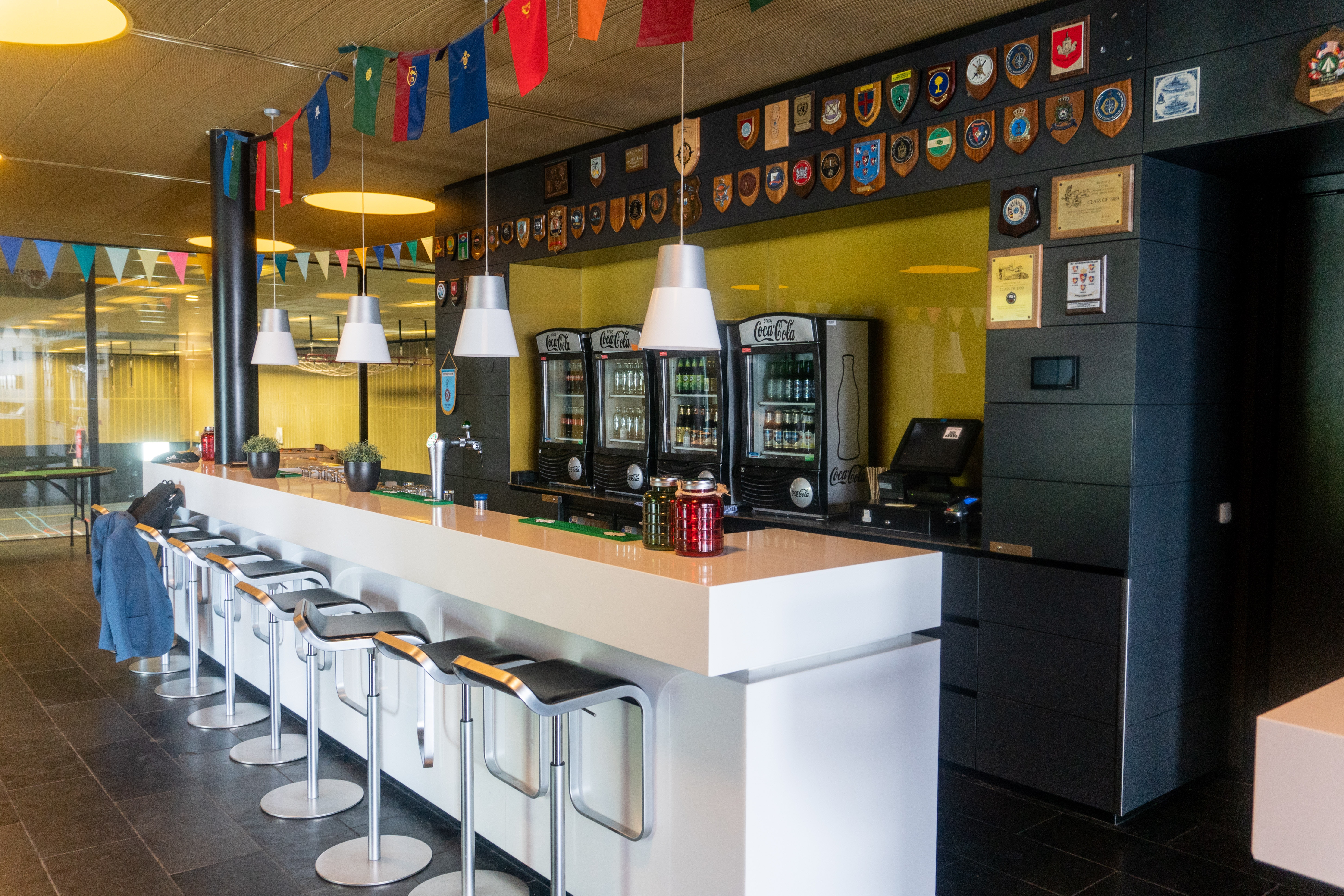 Three remains of Fort Vossegat can still be found on the grounds of the barracks. In the center of the complex is the old bomb-free waiting area. “In the mid-nineteenth century, guns were increasingly used; it had to be built stronger. The walls are thick masonry and there is a layer of sand on the roof.” The building was renovated during the construction of the current barracks. “It’s now a kind of party center, but we can’t always use it because there’s often a bat nesting.”

Located in the middle of the army headquarters The bridge with the twelve holes, a monument that served as a lock. “The bridge is located in the Kromme Rijn, which runs through the twelve holes. When necessary, the river could be blocked with heavy logs. The river then overflowed and flooded the area around the higher fort, making it more difficult for attackers to pass.” This made it an important part of the new Dutch water line. “The flooding of the land was still quite close; the water had to be too deep to go through, but not deep enough for the boats to sail in. About fifty centimeters turned out to be optimal.” 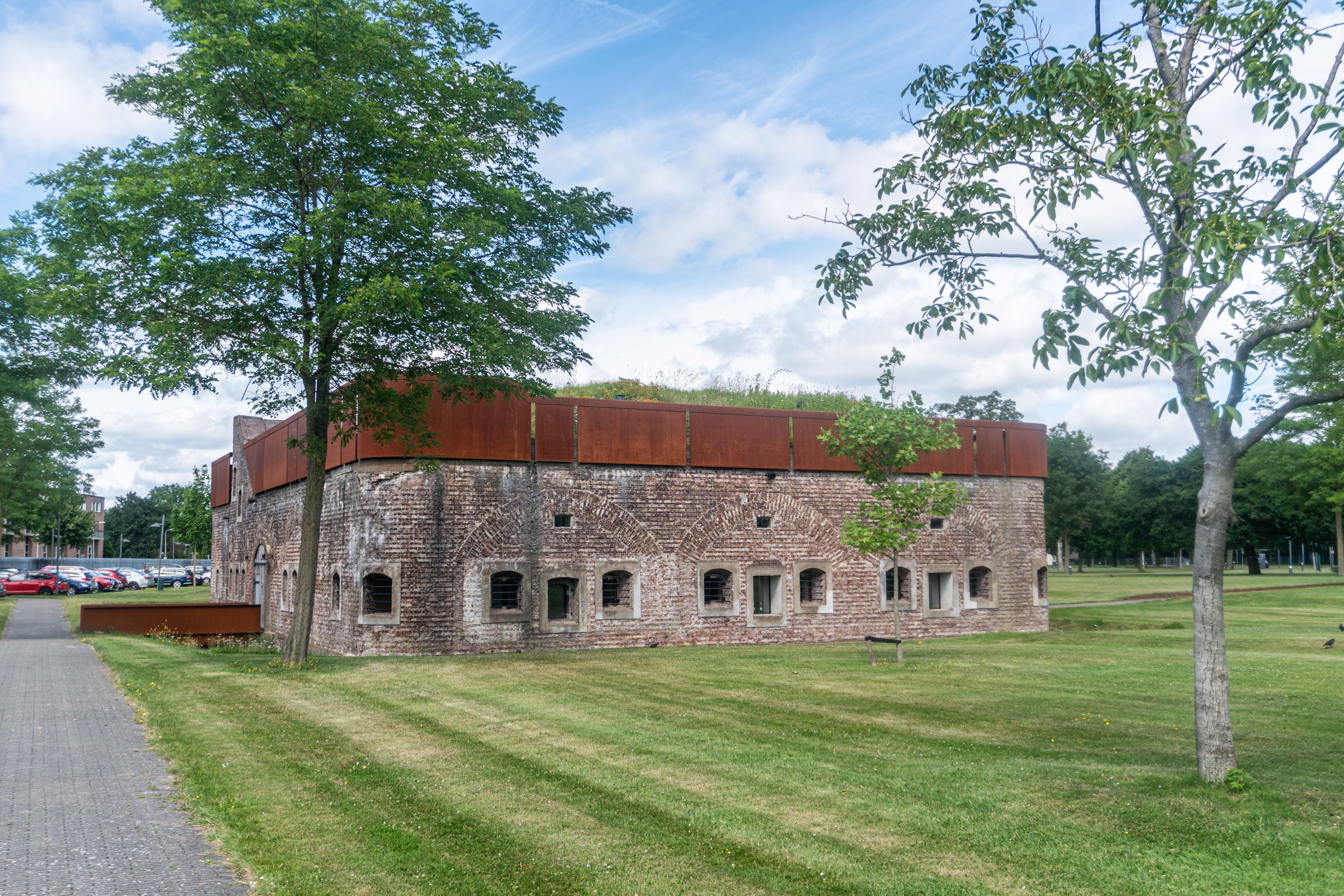 Near the bridge, at the back of the site, you will find the third monument: Tamboershut. “The small cabin was previously a residence for officers, today it functions as a quiet room.” Next to the cottage is the current accommodation for tall visitors. “It was designed with the idea that it would fit into the landscape. The problem with that is that all the walls are made of glass, so all the curtains are closed almost permanently.”

If you also want to take a look behind the scenes at Kromhout Barracks, you can do so during Open Monuments Day on 10 and 11 September.