Entrepreneur Josh Veldhuizen poured all his time and energy into his first ‘child’: her business. But then another child came, and another. “I knew: this has to change, because I also want to be a good mother.”

She is fashionably late. “How could it be different for a fashion girl?” laughs Josh. For as long as she can remember, she has been ‘just too late’. She likes to surround herself with people who have things in order. However, it has noted a slight improvement in this area in recent years. “The arrival of children often causes more chaos, people say, but the opposite happens to me: the children give me more structure.”

Even before the birth of her daughter Alexis, Josh decided to radically change his business agenda. She remembers well that moment four years ago. “Nick and I really wanted kids, but… not just yet. And suddenly I found out I was pregnant! I had just sent my CFO and CEO away, we were in the middle of a move and restructuring both business and personal, so it felt like the worst timing ever to be pregnant.”

It turned out to be a reality check, Josh says, because suddenly change of plans forced her to look at her business differently.

“I knew straight away that I also wanted to be a good mother, and therefore I had to organize my business life in a different way. I could no longer remain the micromanager who liked to be around his colleagues – I didn’t really go to all the birthday parties back then – but in the meantime I had about fifty people working for me. I worked day and night, flying from here to there. I decided to put together a management team, since then schedule fewer appointments per day and give myself more space than before. It’s the best decision ever, although I miss the connection with colleagues from time to time. Anyway again: I also want to be a good mother, so you have to make choices.”

Her fashion company, which has been around for eleven years and expanded to include JOSH V Home last year, considers Josh her first child – a child who deserved all the attention. “Until a week before Alexis gave birth, I was still running around in high heels thinking: As soon as I’m well enough, I’ll take the baby to the office and she can play in the playpen while I work. That expectation made no sense. It was not possible at all. But you don’t know until you experience it.”

“Until a week before the birth, I was still running around in high heels”

In addition, due to complications, the birth went very differently than expected – Josh had heavy flows and lost so much blood that she ended up on the operating table after the birth. “I had hardly been there,” she says, touched. “Especially for Nick it was terrible; During the 45 minutes I was on the operating table, with Alexis in my arms, he didn’t know if I was going to make it.” Fortunately, it went ‘well’. “I couldn’t help myself, I was unconscious. So when I later heard what had happened, it seemed as if it was about someone else. I was terribly tired, but I could hardly remember anything about it.”

In the end, Josh had to rehabilitate for six months to replace the lost blood on his own. “I couldn’t walk or speak in full sentences, I couldn’t do anything, I was so bad right after that rush. Meanwhile, my team kept my business going, for which I am still extremely grateful. But I had no choice, I couldn’t go anywhere. Which, by the way, enabled me to spend a lot of time with Alexis in the first months, probably even more than was ‘normal’.”

Together with Nick, she gave the traumatic birth somewhere. “We didn’t need follow-up talks with the hospital or a psychologist, we wanted to get on with our lives.”

It wasn’t until Josh got pregnant with Elodi last year that the trauma started. “I suddenly noticed how nervous I was and how exciting Nick found it all. I had severe panic attacks. Fortunately, we received good guidance from the hospital and the birth was planned so tightly that we could not face any surprises. That calmed me down.

In the end I was much more ready for the delivery than the first time. Thanks to all that help, Elodi’s birth was an eventful birth. After that I was also very fit – which made me realize how bad I was with Alexis. The extra long leave that we had planned also did me good. At Elodi and Alexis’ home it was a great pleasure.” 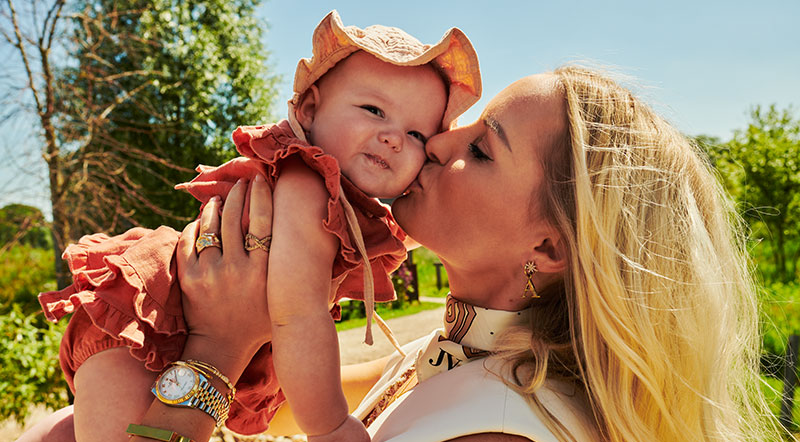 The enjoyment also has to do with Elodi’s calm nature – a world apart from her cheerful, always active sister, laughs Josh. “The contrast between the two was palpable in my stomach: Alexis was so strong and powerful she kicked my bruised ribs, Elodi felt like a butterfly fluttering through my stomach.

“Elodi was like a butterfly fluttering through my stomach”

In everyday life there is also that difference: Alexis is the sunshine in the house, you can’t ignore her, Elodi is so calm that sometimes you almost forget she’s there! In that respect, it’s the ideal order”, laughs Josh. “Elodi is an incredibly lovely, sweet addition to our blended family.”

Every other weekend, Nino (15) and Luèn (13), Nick’s children from a previous relationship, also join the family in Laren. When Josh met Nick eight years ago, she knew he already had children and was coming out of a long-term relationship. Therefore, during one of their first dates, she immediately asked if he still wanted to get married and have children. “I’m far too busy with work to waste my time on men who aren’t serious: I had to know.”

Luckily, Nick turned out to be more than serious and he was allowed to quickly move on to the next round, Josh winks. “After six months we bought a house together and after three years I was pregnant with Alexis. The pace was good.”

The fact that Nick already had two older children did not deter Josh. On the contrary. “A lot of people said: where do you start? But I found Nick to be such a serious, funny father really attractive. Also, I love children and used to dream of a big family. I could never have dreamed that at 35- year would have a family of four children; I really consider Nino and Luen a huge bonus.”

Would you like to read more beautiful and recognizable stories from fellow mothers? Subscribe now and receive Kek Mama first at your door each month.