In addition to a number of logistics and consulting organizations, public transport is also represented in the Amsterdam Transport Region (VA): VA is even the protagonist. Last year they decided to make visible the importance they attach to diversity, and LGBT diversity in particular. GVB supplied one tram, Connexxion two buses and EBS one bus: these were plastered in rainbows, financed by the VA. The vehicles continued to run in the rainbow colors for a year until after Pride 2022. In addition to the rainbow colors, they also carried the word ‘welcome’ in different languages.

The tram ran through Amsterdam, the Connexxion buses in Amstelland-Meerlanden and the Zaanstreek, the EBS bus in Waterland.

Note: Connexxion’s PrideBus also participated in the now famous Pride Walk (a week before the canal parade, with approximately 5,000 participants) so that pink elderly and disabled people could also join. Kudos to Connexxion!

I don’t know if it was the joint campaign, but Transdev, the company that Connexxion belongs to, was inspired to show their diversity again this year. “We want to pay special attention at Transdev/Connexxion to the beautiful diversity of people in our organization, and we strive for diversity and inclusion. Because only with the best people and the best teams can we realize our ambitions.”

Small pun allowed: Transdev, what’s in a name – “and for this reason”. They recently posted on their website and social media about 20-year-old Sophia, who is one of the youngest in the profession as a newly graduated machinist. She really likes this.

“Connexxion’s train department is not only quite small in relation to NS, but also in relation to Transdev’s other business units. But I think that’s an advantage, it feels much more personal here, closer. I was immediately included in the group.” And that’s the special thing, because “Sophia came here not long ago as ‘Dylan,'” says Harina, her tutor. “During one of our first conversations, I already had the feeling that Sophia was struggling with something. Fortunately, she dared to discuss it with me; since then Sophia our new colleague.” Sophia: “There is a saying within ‘rail’ that I can relate to: I really am ‘on the right track with a smile!'” 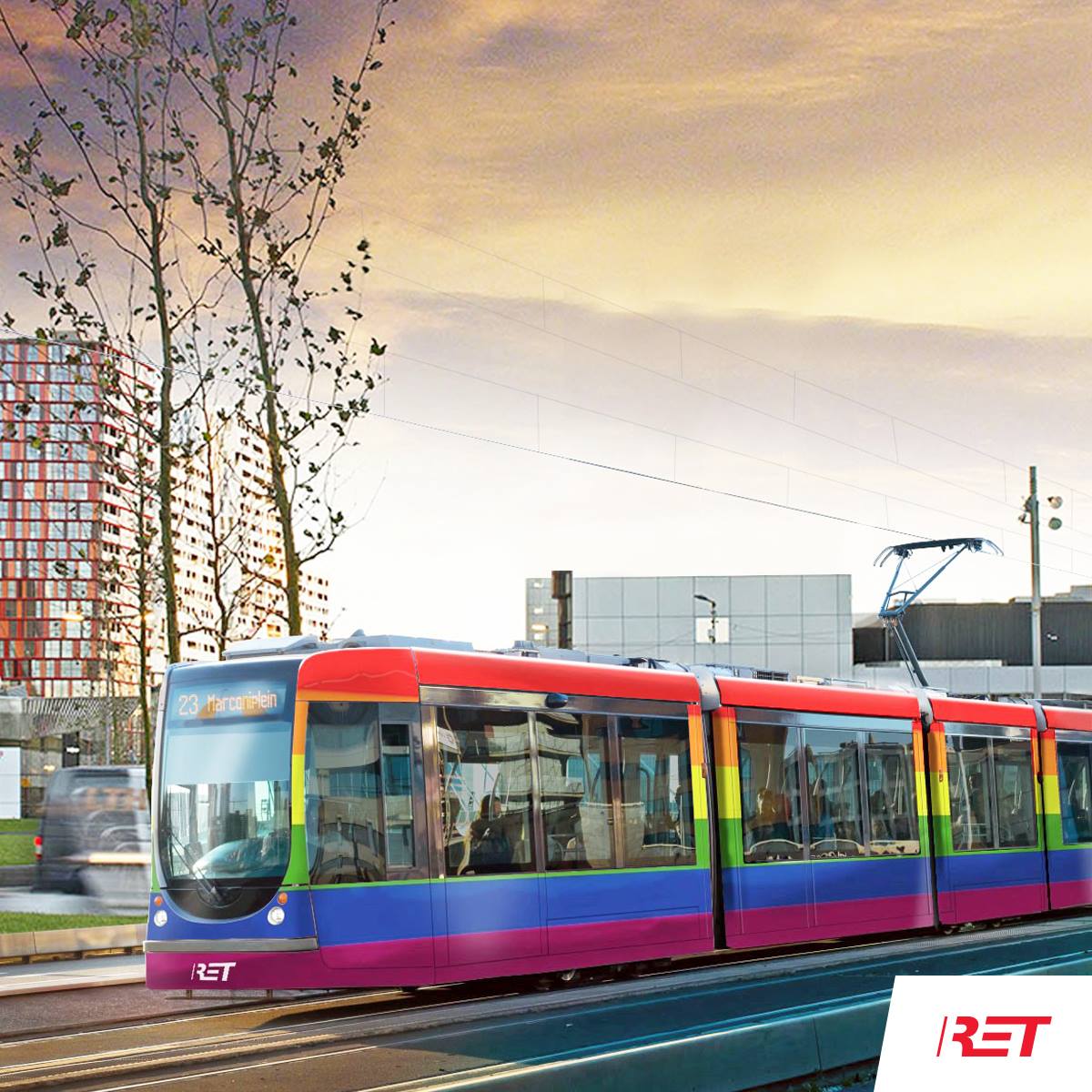 With a GVB as a model, the other city transporters must have got ideas. Well, that’s pretty disappointing. When asked, RET says: “We once raised the rainbow flag on a Pride day. And we posted this post which is photoshopped. It says that JUSTICE is for all.

“As RET, we attach great importance to mutual respect and safety. Internally, this is reflected in our company code, where we have laid down the rules of conduct. It explicitly states, for example, that unwanted behaviour, such as bullying, aggression and violence, (sexual) intimidation and discrimination will not be tolerated. We are also investigating the possibilities for a gender-neutral collective agreement.

We also communicate the standards and values ​​from the company code to all our people who have contact with travelers. We treat our travelers equally and do everything we can to give them a safe and comfortable journey.

We do not have specific policies for the LGBTQ community any more than we do for other specific groups. Rotterdam is extremely diverse and as RET we are committed to respecting this diversity in all its manifestations. We have a generic policy on this because our commitment on this point is the same for all the different groups.” 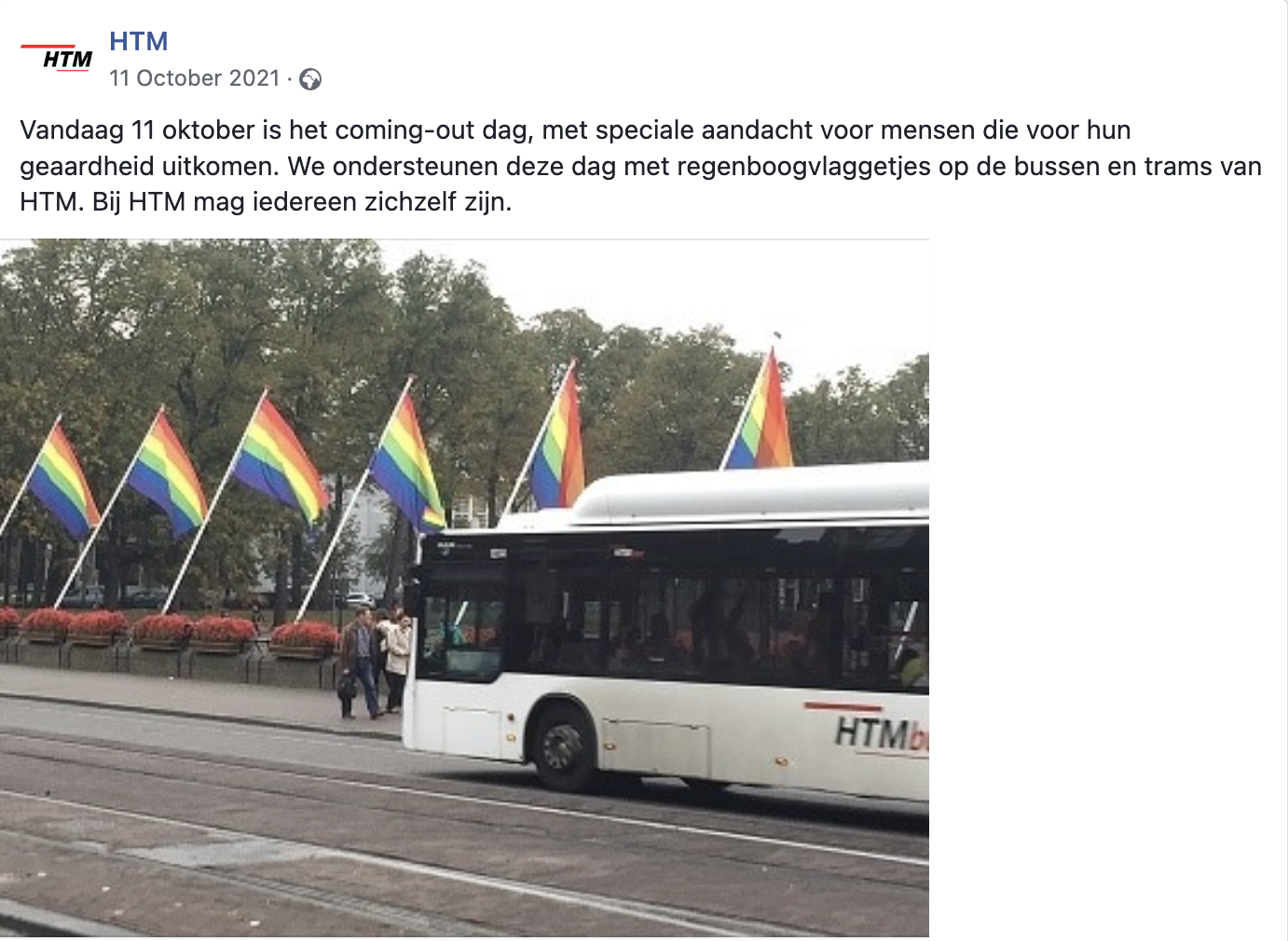 In Hofstaden, things also calm down a bit, but the emphasis is on relevant events. HTM has carried rainbow flags on trams and buses for years Coming out today and The Hague Pride (the successor to the Rainbow Festival, which was organized annually from 2016.). Incidentally, this was also done in January 2019 in response to the Nashville Declaration, a very special gesture! However, visual material is hardly to be found, and certainly not entire buses have been repainted. In the photo she posted on socials last year, a number of municipal flags have been strategically placed, so that the bus’s mini-flag is somewhat compensated.

HTM signed the Diversity Charter in 2021: “We want to be a good reflection of The Hague region, and therefore we want to work on an inclusive culture. (…) We believe that diversity leads to new perspectives. We will work towards a culture where everyone feels welcome regardless orientationage, gender or migration background.”

Utrecht dangles at the tail of the public transport peloton (at least in the 4 major cities). I couldn’t find any material, despite the fact that the city has had a great and successful Pride for a while. They tell me: “We have a clear vision and are busy with the layout. At this stage, we have not yet developed enough to be able to provide explanations and examples. If you want to write an article about this in a year’s time, we would be happy to collaborate on this.” If deed.