Anouk (34) and Fabian (40) traveled through Colombia for a month with daughter Laure (then 2) and son Bram (then 8 months) and got exactly what they needed: sun, adventure and crocodiles.

“The idea came last year, between Christmas and New Year, during the lockdown. It was raining, we were in a holiday park, everything was closed. We were sitting inside very upset. Fabian and I decided to see which countries received a ‘yellow’ or positive travel advice despite the pandemic.

That’s where Colombia came from, a country we’ve always wanted to visit. There, in that holiday park, we immediately ordered a ticket. We moved around with work and a few weeks later we were on the plane. 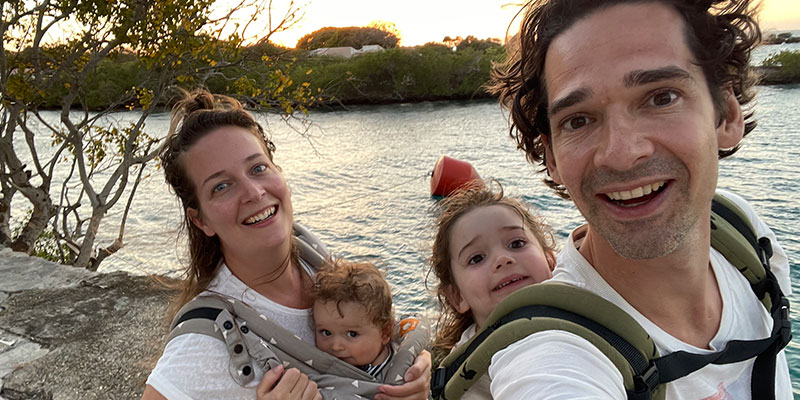 On the way, after my son’s fifth or sixth poopy diaper, who wouldn’t sleep, I wondered what we were getting into. I also noticed that other passengers thought it was special that we were doing this with our family; even the flight attendants were amazed. Should I start doubting now, I thought for a moment. But I knew the region we were going to was safe.

“‘In our neighborhood in Cartagena, we immediately entered the cheerful Colombian atmosphere”

On landing, we immediately entered the lively atmosphere of Colombia; on the way from the airport there was music everywhere and we saw people drinking cocktails outside. It was thirty degrees, a tropical evening. In the neighborhood where our hotel was located, there were flags and umbrellas everywhere. The doubt that arose for a moment in the plane was completely resolved from that moment and has not returned.

The first days we stayed in Cartagena, in the Getsemani district, to recover a bit. We spent our time eating lunch, strolling the streets and often hanging out with musicians because our daughter liked it so much. She would go all out, dancing with the dancers in their traditional clothes, in a diaper and waving her skirt.

We also visited a park (Parque del Centenario) where a family of sloths hung out – fun for the kids to look for these animals together. When it got too hot in the afternoon, we jumped in the pool at our hotel. 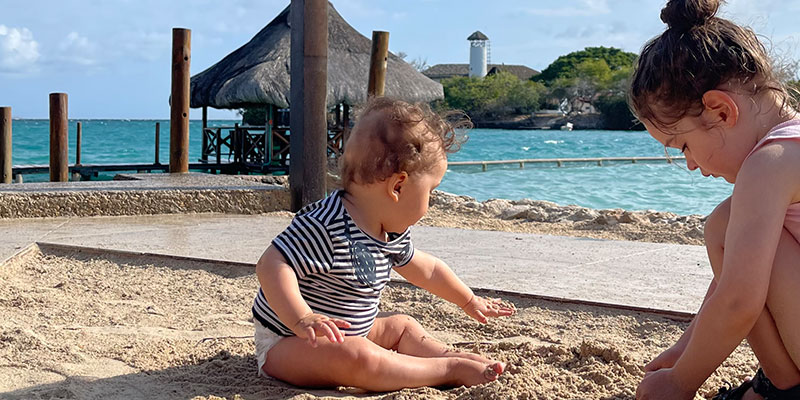 After a few days we took a taxi to Palomino, a small town on a palm-fringed beach with a very relaxed surf vibe. We then left for Minca, a higher tropical mountain town, before returning to Cartagena for the boat to the Rosario Islands.

“Palomino is a small beach town with a relaxed surf vibe”

Along the way we saw volcanoes, dry plains, avocado trees, cacti; in the jungle we imagined ourselves in a green oasis. There we went on a short hike to a new waterfall every day. To my surprise, we came across a restaurant where we had a delicious vegan meal with a beautiful view, and another time we found a crocodile breeding center, much to the delight of Laure, who was just in her crocodile phase. 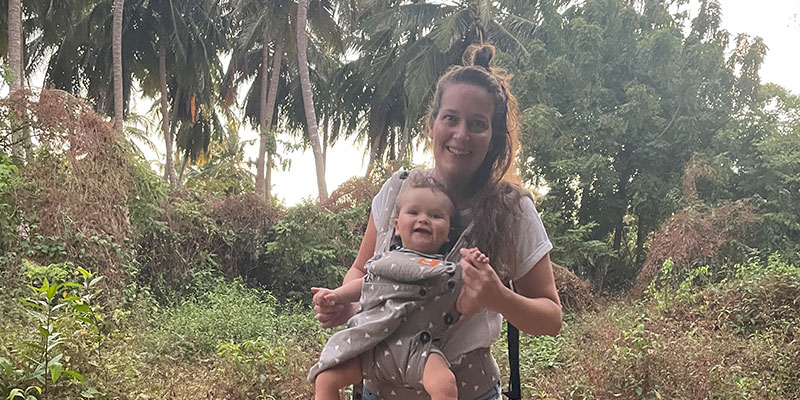 In fact, we were looking for that adventure everywhere we were, and we wanted to discover places: what is there, what can we do here?

On the Rosario Islands we just pushed the buggy over all the little paths on the island. We found Pablo Escobar’s house there, we saw children playing, our daughter really liked it. It’s a shame we didn’t speak the language well, but it was still special to see how people lived out there, celebrated a birthday or just fetched water.

In advance I had an idea how Fabian and I would enjoy the day together every evening with a beer and wine. It didn’t work: It was quite hard to be out all day with the children, wanted to do a lot of things – and that with jet lag. As soon as the kids were asleep, we often went to bed ourselves.

Still, this trip had so many highlights. How our son sat with his bottom in the waterfall when he could barely sit. Or moments on the beach, when we played with Laure in the surf, while Bram sat on the beach in his rocker and got all the attention of passers-by.

“Because we kept thinking in terms of possibilities, this trip had so many highlights”

It’s really cool that we can do this, I thought. It takes some effort, but in the end everything went well. Because we had faith in it and because we continued to think in terms of possibilities despite the sometimes difficult circumstances.” 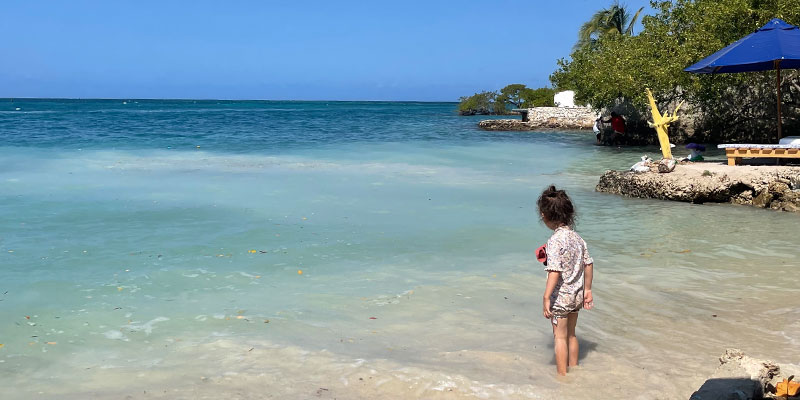 You can enjoy tubing in Palomino; float with a rubber tire on the river through the jungle to the sea. Fabian did it with Laure on his lap, I took another day on my own, it was wonderful me time.

Go to the Rosario Islands for a few days. White beaches, clear blue water, children who only need a shovel in the sand and a wonderful island atmosphere of nowhere.

Go to the Reserva Biologica Caoba to see how chocolate is made from a cacao bean in the middle of the jungle. Very nice, with a very passionate owner. The journey there is via the river, very adventurous!

In Minca we slept in Finca Carpe Diem, a beautiful place in the middle of nature. Small scale, but with three swimming pools on different plateaus with beautiful views of the jungle. You can also swim in a waterfall. Be prepared for a bumpy ride on the way there.

The spacious apartments at Casa Sisiguaca in Palomino are located on the beach. You can relax in a hammock between the palm trees while watching the squirrels.

Cartagena is a very international city, you can eat anything there. At Plaza de la Trinidad in the Getsemani district, you will find all kinds of street food. The children play in the square while you eat. Or order a table-sized pizza on the patio to share.

At Suá Cocina Conciencia in Palomino you eat with live music and among the palm trees. The people are very nice, the atmosphere is very nice.

You can eat delicious empanadas everywhere; you will also find a lot of fresh fruit and fresh fish. Laure was especially happy that pancakes were always served for breakfast.

Want to see more travel photos of Anouk and her family? Check out her Instagram page: Anouk_reizenmetkids 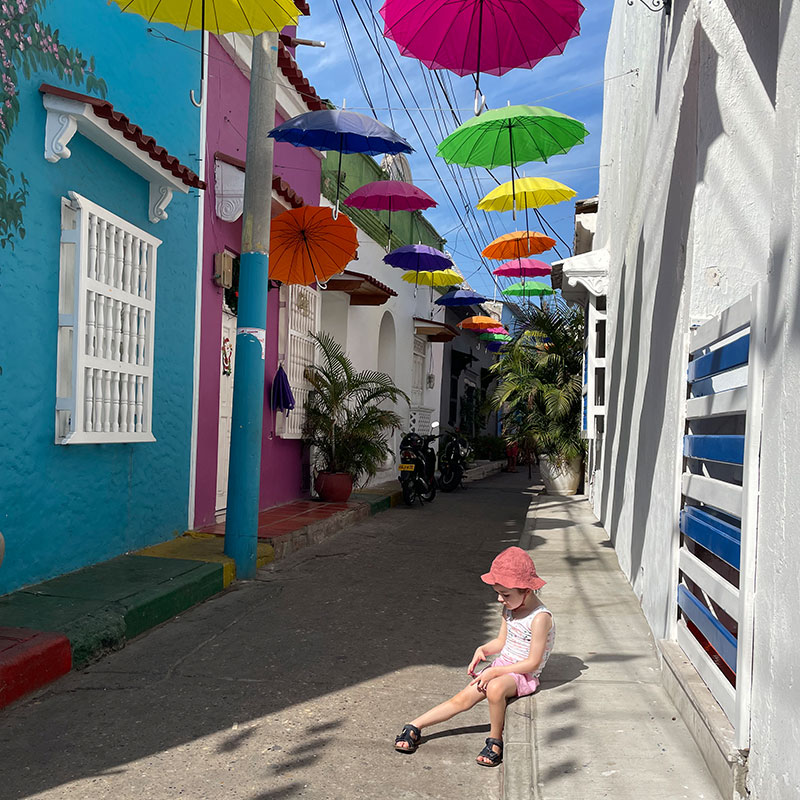