A few weeks ago we got to test the new all-electric BMW CE04. Still, we wondered how this modern engineering feat compares to a more traditional gasoline engine scooter. That is why we have now also been on the road with the BMW C400GT: a luxurious 350cc 1-cylinder motor scooter with 34 hp and a weight of 214 kg. Is it already time to switch to an electric scooter, or is it still a little too early for that and the petrol engine will continue to be preferred?

What immediately stands out is that the C400GT is a large scooter. It is long, low and with its distinctive design it is quite present. With most scooters, ‘function over form’ is the design philosophy. A motor scooter must be functional, ergonomic and easy to use. It often does not result in the most beautiful designs, but BMW has still managed to create something unique. The engine has a robust appearance. The front in particular is quite impressive. When you see this bike in your car mirror, you don’t expect it to be a super quiet, ergonomic scooter.

Despite all the hard work from BMW, this motorcycle remains a motor scooter and they don’t have the best reputation with other traffic. Motorists often find scooter riders annoying, and motorcyclists often do not recognize scooter riders as ‘real’ motorcyclists. So don’t expect to be accosted by oncoming motorcyclists, as they often refuse. The only people who came to talk about the two-wheeler during our review were other (motor)scooter riders.

Traditional, but there is technology

This motor scooter is also a real BMW motorcycle. As you would expect from a BMW engine, the C400GT is equipped with all kinds of luxury. Think a TFT color screen, a compartment for your phone with USB connection and the familiar (but unfortunately still unlit) control cluster. The motorcycle can also be linked to the BMW Motorrad app, where you can find all kinds of information about the motorcycle and even start a route description. This engine has the older screen and therefore cannot display the entire map as it can with the electric CE04. You can see a rev counter on the screen in city mode. But… what good is a tachometer on a scooter without gears? As far as we’re concerned, this is a bit of a waste of screen space.

The GT in the model name stands for Grand Tour and it shows. As an additional option, the scooter is equipped with a slightly higher windscreen, saddle and heated grips, plus a luxurious saddle with lumbar support. All this helps to cover longer distances as comfortably as possible. This is a world of difference compared to the electric CE04. Dee didn’t have a windshield, so you’re full in the wind. Fine for indoor use, but on the highway it was really hard. This C400GT does much better there. The only option we miss on this touring bike is the cruise control.

What we also think is a brilliant addition to the practicality of the scooter is the BMW Flexcase. It’s a kind of false bottom in the buddy seat that you can double in space after parking the motorcycle by folding it out. This results in the companion sitting on the rear wheel, but you suddenly have room for two helmets in the companion’s seat. One of them must be a jet helmet. Because the flex case rests on the rear wheel, you need to fold it back up before you start riding. This is also indicated on the screen so you can’t forget this. When the buddy seat is folded, it’s still roomy enough for a helmet and a chain lock.

This is how the BMW C400GT drives

The BMW C400GT is an ergonomic and, above all, easy-to-drive motor scooter. Despite its size, the bike feels nimble, predictable and instills plenty of confidence.

Unlike the electric CE04, this motorcycle feels perfectly at home on the highway. With the 34 hp engine you are very smooth and in no time with the top speed of 139 km/h. The scooter does exactly what you would expect from it, and that is perhaps also the downside of riding the C400GT. It feels very vanilla and there is something exciting about it. It’s not the type of bike to go on a fun weekend ride. Neither was the CE04, but because of its futuristic design, the attention you get with it and the massive acceleration, just a little more than this C400GT.

There is nothing wrong with the BMW C400GT. The scooter is luxuriously equipped with a lot of features and options that you would expect on a motorcycle at this price. This engine is not cheap with its starting price of 9300 euros. Our test bike had an RRP of €10,704 and was equipped with some extra options such as triple black color scheme, heated seat and grips, an alarm system and the LED headlights.

Just because there’s nothing wrong with it doesn’t mean you should buy this bike right away. Yes, you will arrive very comfortably at your final destination, regardless of whether you have been on the highway or inland. But the ride hasn’t been particularly exciting, and that’s kind of what motorcycling is all about: experience.

If you’re looking for a premium motor scooter and accept the less exciting things that come with it, then you can’t go wrong with this C400GT. It is a successful and beautifully designed premium motor scooter. Whether you should go for the electric CE04 is a matter of personal preference. You hardly need to do it to save fuel, because the C400GT has a specified consumption of 3.5L per 100 km.

In any case, we think the electric CE04 is (even) nicer, more fun to drive and much more special. Even without waving at other motorcyclists. 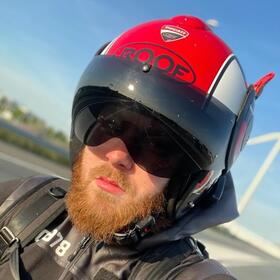 Nick got on the bike as soon as it was legally allowed and never got off. For DutchCowboys, he reviews everything on two wheels….