In 2013, NASA and ESA announced that Europe would provide the service modules for humanity’s next lunar missions for astronauts. From design to review, building and testing, many people, companies and hours have gone into creating the next generation of hardware that will keep astronauts alive on their journey to the moon.

The ESA team for the European Service Module is based in the technical heart of the Agency, ESTEC, in the Netherlands. From here, about 60 people oversaw the design and reviewed it with NASA and industry partners to ensure everything would meet specifications. “We had a lot of experience and know-how with the automatic transfer vehicles that brought fuel and cargo to the International Space Station, but the European service modules are completely new and much more complex,” said ESA’s Orion engineering team leader Antonio Preden. “It was an interesting time to get the design done, to check and review and consider how everything would be built.”

More than 20 companies from across Europe contributed to the construction of the space module, and most of the hardware was sent to Bremen, Germany, to be assembled by the main contractor Airbus. “In many ways, the design and assessment process was more intensive than the actual construction process,” adds ESA assembly and verification engineer Dominique Siruguet. “Once we had a solid plan and all partners and industry agreed on the design and implementation process, the next step was to bring it all together.”

The structure itself, Orion’s backbone, begins at Thales Alenia Space in Turin, Italy. Once they have delivered the bare structure to Airbus’ integration hall, the tireless work of installing 20,000 parts, 11 km of cables, 33 engines and 11 tanks for fuel, water and air begins. Many parts for the European Service Module are custom-made for Orion and, being engineering marvels, can take many months to prepare. These so-called “long-lead items” are ordered years in advance, sometimes before the contracts or even the design reviews are signed. 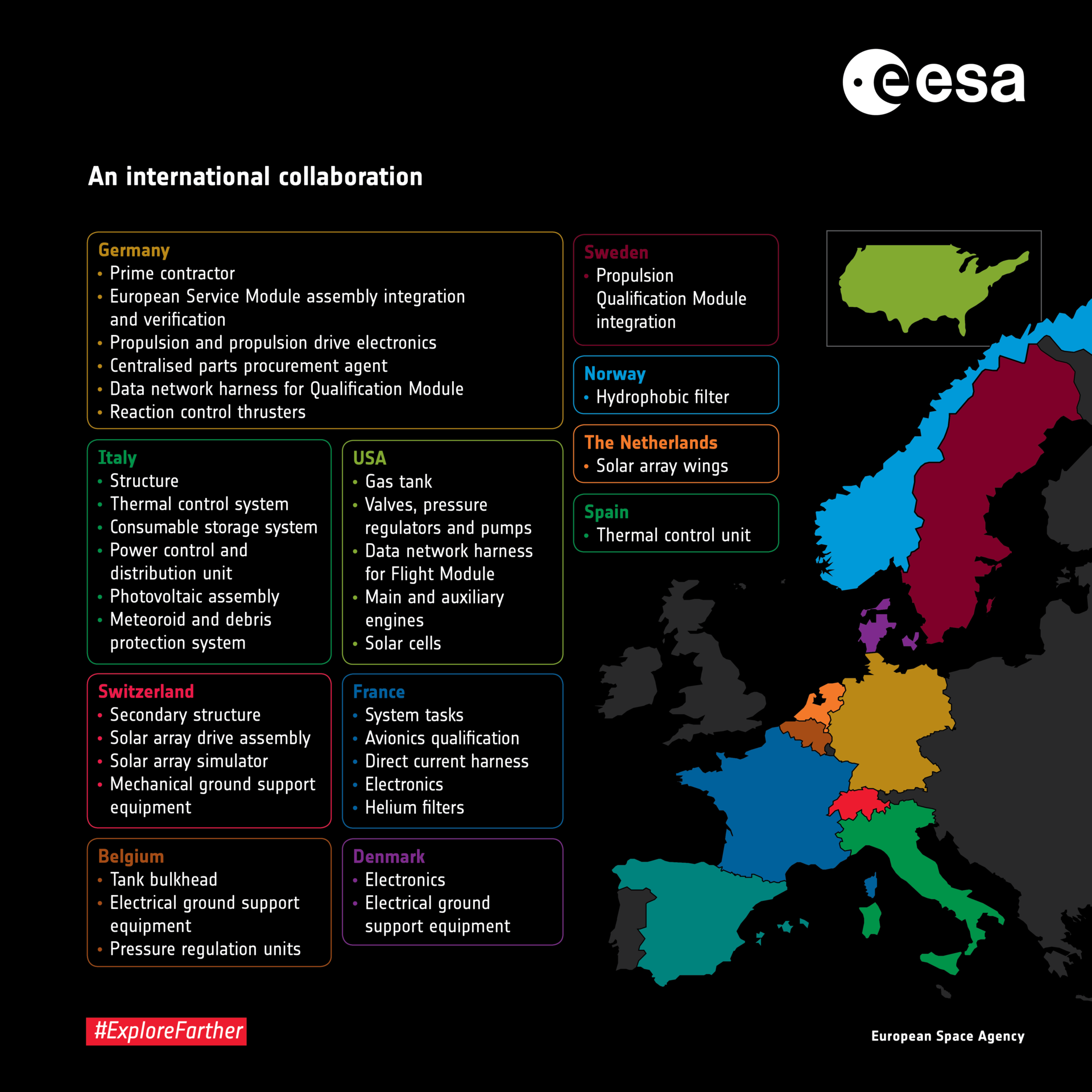 Overview where all parts are made in Europe for the European service modules – Photo: ESA

In Bremen, parts began to pour in from 10 countries in Europe and the United States, and the engineers had the daunting but satisfying job of assembling them all. “Building Europe’s first human-powered crew vehicle hardware is like a big puzzle – with the added complication of having to deliver on time,” said Philippe Berthe, ESA’s project coordination manager for the European Service Modules. “International cooperation and commitments are key to success, with each company providing its expertise and components to deliver everything on time.”

Working with NASA on Orion has been a unique challenge, said Max Bottacini, ESA’s chief engineer for the European Service Module. “Each system has interfaces that are carefully designed and verified by both space agencies and their prime contractors.” Despite some difficulties, the result is now tangible: a fully qualified and delivered first European service module, ready for Orion’s first mission around the moon this year. This is the result of good engineering and a high spirit of cooperation on both sides of the Atlantic. Many thanks to the technical teams from the agencies and industries for this achievement!”

In the coming weeks, leading up to the first launch of Artemis, ESA’s Orion blog will look at the hardware and service contributions to the European Service Module by country.