Learning through motherhood Show newshost Dyantha Brooks plans something better, but she still loses her keys and is regularly late. “I’m not a standard mother, I have my own structure.”

“Everything is going so well, I really have nothing to complain about!” opens the cheerful Dyantha Brooks. “The sun is shining, the kids are healthy and I can work tonight, what more could I want?”

“Back to work? Out with Davis? No, I didn’t care to think about it. Everything was exciting and I was very worried: every minute away from home was one too many. Eventually I got back into the rhythm, but fun? Absolutely not .”

Now, with Lewis, Dyantha is less worried. In addition, hers changes to Show news a lot, she says. “At the time I was working on the radio during the day and I missed Davis a lot. Now I am at night Show news present, I can be with my children during the day. I actually have the best of both worlds.”

The days are long, because where someone else flops on the sofa at seven o’clock, the live show starts for Dyantha. “But I’m fine, also because I take good care of myself: I start every morning very calmly. And I get enough sleep because Lewis sleeps through the night. I almost never dare to say that out loud, because there are so many parents with broken nights, but we are very lucky with that.”

Another happiness factor is a nice, cooperative man, explains Dyantha. “When rush hour starts at home, I leave. So while I collect and do it all during the day, Mick makes sure the kids are washed to bed after dinner. This rhythm is part of my job and Mick is more than happy to make that ‘sacrifice’ for my career. This is how we help each other, we are yin and yang.”

“When rush hour starts at home, I go to work”

Without Mick, there would have been no career at all, Dyantha laughs, because she was never really ambitious. “I grew up with a little house-tree-animal: Home is my happiness. It must be good. Career-wise, I just need a kick in the ass.”

And she gets that from her husband. “Mick comes from a real entrepreneurial family, with the mentality there are no limits. In the past I often whined about ‘where I stood in life’. Mick held up a mirror to me as crystal clear: ‘And what exactly did you do with it? Nothing!’ He challenged me by constantly asking: what are you going to do about it, what is your next step?”

One foot in the door

Blood annoying at the time, Dyantha admits, but now she is very grateful to him. “Mick was tough but realistic. If I didn’t want that TV career, that was fine too, but he said very clearly: “I don’t want to sit with a grumpy person in twenty years who is disappointed that she have not done or dared.” In other words: “if you want it, work hard for it.”

His words had effect. Now that Dyantha says she’s ‘walked in the door’ on TV, she wants to make the most of it. “I dream of my own human interest program and a series about Videoland. But: it keeps skipping. My family comes first, so it has to fit side by side.” 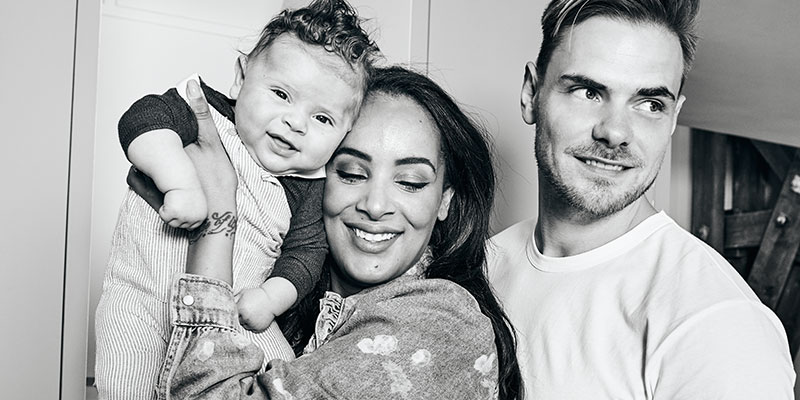 Of course, that family wasn’t there right away. First there was love. When Dyantha met Mick twelve years ago, she fell in love with him.

“I knew: this is the man I want everything with. I’ve just never met a nicer man who is also my best friend. Such a terrible statement, but it’s true. We match very well. I used to meet guys who were too nice or just total lapswans. Mick is a strong man who impresses me and I can’t waltz over, but at the same time he’s sweet, loyal and someone I can trust. The perfect, attractive combination for me.”

One day they would like to have children, if it was up to Mick himself five, but a definite plan was not ready. “It just happened. I once had problems with my IUD, had it removed, then had to be on the pill, forgot of course and suddenly got pregnant. Unplanned, but very welcome. It comes as it comes.”

And that sometimes it doesn’t come, unfortunately Dyantha also knows, because after Davis a miscarriage followed. “It was sad, of course, but such things are part of life. I don’t want to be too dramatic about it in our case: Mick and I have worked it out together and are now blessed with another child.”

“After an abortion, you know: It is not up to us to decide what nature decides”

However, that experience made the couple much more realistic in one fell swoop. “One day we will ‘take’ four or five children, that was the easy thought: we just do it. But after a miscarriage you know: it is not up to us to decide at all, nature decides. From that moment on, I hoped we would have another child. We now see that two children are also very beautiful: we can still do everything we want, and the grandmothers like to look after children. I’m not going to saddle those people with four or five kids, am I?”

A purely practical consideration. “Certainly, because in terms of love, I have enough room for a large family. But we are allowed to squeeze our hands with two healthy children – besides that, there are more things in life that matter, such as my work and our relationship.” 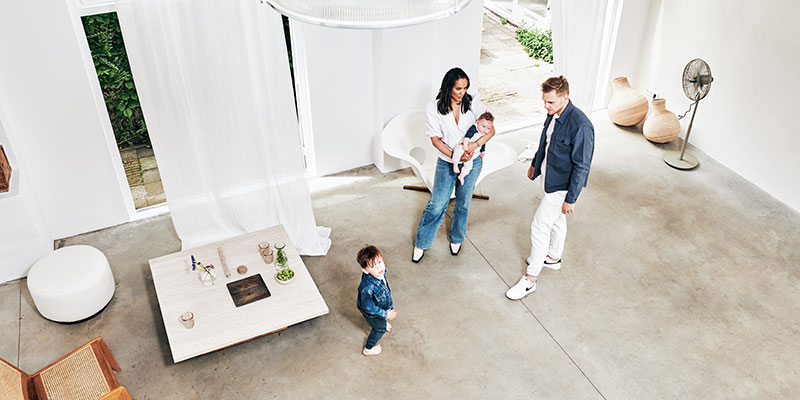 Time for each other

That relationship is therefore quite high on Dyantha’s priority list. “I think it is very important to keep making time for each other. During the day you are constantly changing: you want to train now, I’ll stay at home, who does the shopping? I come every evening at 21.30 or later Show newsedition, at 12.30 at home. But sooner or later: Mick is always awake. The time we don’t have during the day, we make up in the evening. I would find it super uncomfortable if I went to bed every night in a quiet house next to a sleeping Mick. It may be wise, but I firmly believe it will keep our relationship alive.”

“We make up for the time that Mick and I don’t have during the day, at night”

Around her, Dyantha sees that too many people lose each other a little, she says. “Logical, because it’s also a lot: work, children, sports, social life. I am very aware that my relationship is one of my biggest happiness factors. So if I work a few nights in a row I don’t go out with friends on my night off, I want to be with Mick. Literally ‘to be’. Not outside the door, but cozy at home or in the garden. Recently we were on holiday in Portugal with my mother-in-law. She said every night that we could go out to eat, that she would take care, but we don’t want to do that at all. We prefer to get tasty things, turn on the baby monitor and make it a great evening on the balcony!” 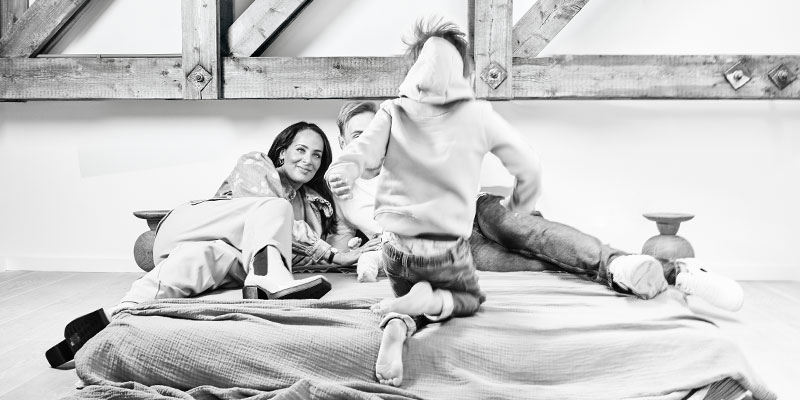 Making deals and planning isn’t necessarily in Dyantha’s nature anyway. “I’m the most chaotic person in the world,” she laughs. “And Mick too. We’re always losing keys or debit cards or we forget to open our mail. I don’t think I’m a typical mum. People who suggest drinking coffee in the playground at nine o’clock? Terrible. I’m one of them , who pops in at three and only then thinks: hmm, isn’t it time for lunch? In other words: we have our own structure and it works well – not always, then I’m late somewhere because I’ve lost the car key again, but yes.”

Parenthood has forced the couple to become more systematic. “Because we are both naturally chaotic, it is a sheer necessity to make good agreements, otherwise it gets really messy. You find out when you have a child: it’s just not practical if both of you suddenly have an appointment outside the door and have to go. Then you have to put things on the agenda and discuss them.”

Good deals seem to be of vital importance. “In the first few weeks, when Lewis didn’t sleep through, we agreed who would go out that night before we went to sleep. If you don’t, you’ll end up fighting at night because you’re still arguing completely broken. We will definitely do that. Through trial and error you become wise!”