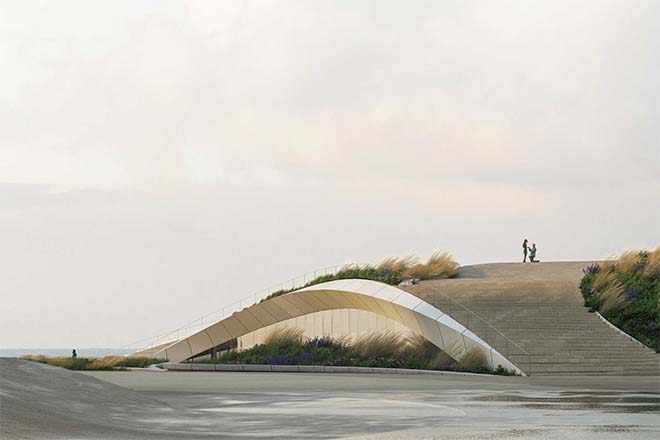 New lighthouse by the sea

The task of designing a new event building on the coast at Middelkerke and at the same time strengthening the existing seawall was approached from the perspective of the original landscape. The design adds a renewed dune landscape to the existing coast. In the heart of the area is a striking building that stands as a new lighthouse by the sea. The Middelkerke event building contains a casino, a hotel, a restaurant, a multifunctional event area and an underground parking garage, which ensures a car-free zone at street level. In addition to strengthening the sea wall and car-free zone, the design also contributes to the improvement of public space by merging the boulevard and Epernayplein.

Reinald Top, partner architect at ZJA: We are very honored by this International Architecture Award for the Middelkerke event building and the jury’s recognition. The building combines coastal reinforcement, livability and sustainability. Thanks to the parking garage under the dune, the removal of cars from the Epernayplein and the extension of the public space towards the sea, space has been left for what can safely be called an interesting destination; a place of interest, the green dune-like square with ponds and fountains, which gives access to the beach. 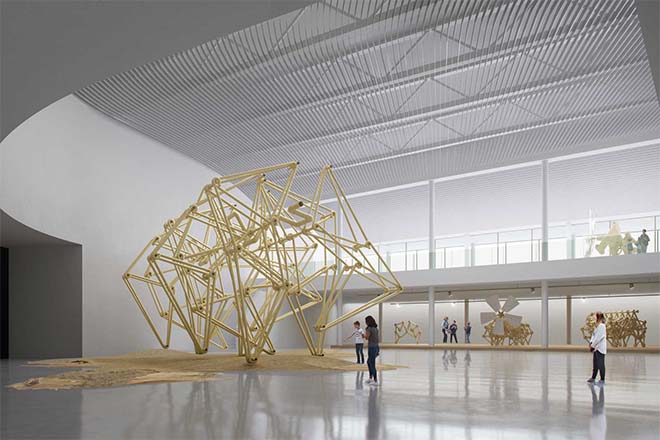 Integration with landscape and coastal defence

The soul of the design lies in the intimate integration with the dune landscape, the transformation of Middelkerke’s center into a pedestrian-friendly area and the realization of a building that acts as an eye-catcher. And that while the seawall is being strengthened, which offers Middelkerke security together with urban renewal and an economic boost.

Steven Delva, founder and partner at DELVA, and landscape architect: The integrated design is a new chapter in the history of Middelkerke, which arose as a fishing village after dunes were formed on the historic Testerep peninsula. The dunes provided protection against flooding, and the waterway between the island and the mainland was a direct connection to the North Sea. After a century of large-scale development and infrastructure projects, the original landscape has almost disappeared under stones and asphalt. Our design aims to restore the dune landscape to its former glory. 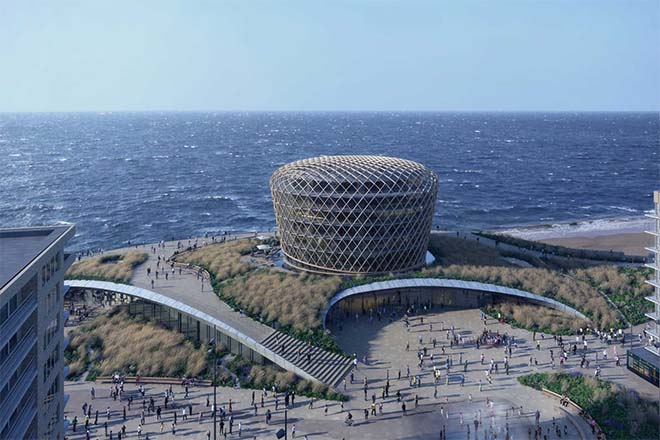 The design creates an extensive public space with the existing Epernayplein as its center. The dyke will be moved further out to sea, enabling an extension of Epernayplein while integrating it into the landscape. An underground parking garage ensures a car-free zone. A large artificial dune is built to connect the city, the square and the beach with the casino, the public hall for exhibitions and concerts and a restaurant. Marram grass, water features and sand channels that open onto the beach simulate a dune experience. The new public space, with the climb to the green square at the top of the dune, is a tourist attraction in itself. 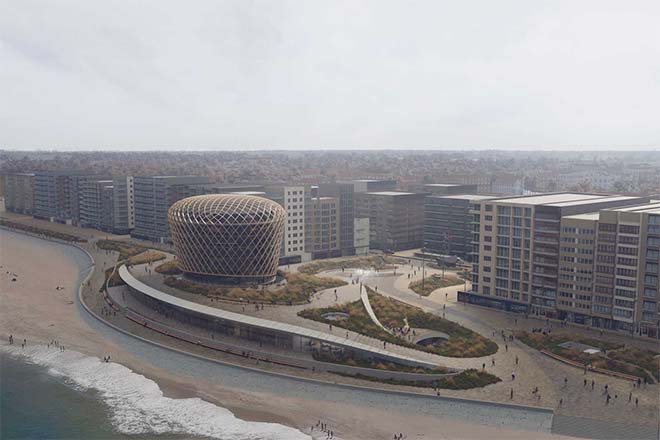 Sustainable icon on the Flemish coast

Connected to the event building, the beach hotel, with its enigmatic, sculptural silhouette, is a low-key icon with an open grid of curved accoya wood beams. The entire design optimizes the processes of energy supply, waste treatment and production and uses recyclable materials where possible.

Jean-Marie Dedecker, mayor of Middelkerke, thinks that this award for the Middelkerke event building is fantastic. The presentation of the International Architecture Award proves that two years ago we chose the best proposal. The sober, intuitive design immediately appealed to our panel of various experts. The unanimous choice at that time is now reinforced by this award. You also felt that the construction team more than carefully did their homework and came up with a sustainable and stylishly designed building. In the meantime, the construction of this eye-catcher for our municipality has started. We can’t wait for the new event building to turn up the experience in our municipality like a flywheel! I would like to congratulate the construction team, constructors and contractors for winning this award! 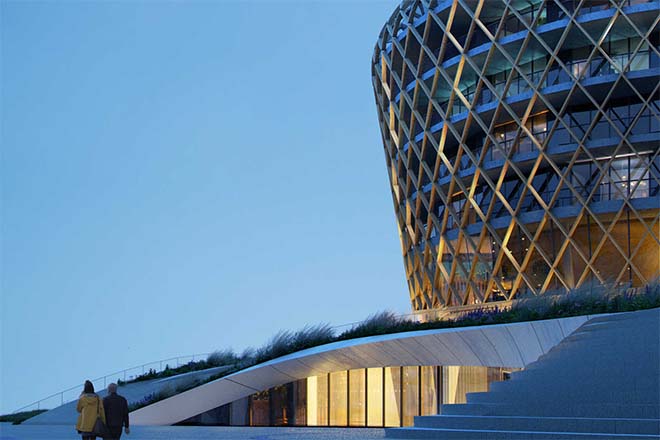 The project was only possible thanks to an intensive collaboration with the services of the municipality of Middelkerke, the Ministry of the Environment and the Agency for Maritime Services and the Coast of the Flemish Government.