Eindhoven Living Lab 040 has started testing new housing and housing concepts for the city of tomorrow. In the project, 119 homes will be built, which will also be occupied during the trials. On Tuesday, councilor Mieke Verhees (Housing, neighborhoods and spatial planning) launched the project.

‘It’s rock-solid’, says councilor Verhees, as a wall panel for the second home has to be put in place. For many people, the construction of the first three innovative homes means that Living Lab 040, on the outskirts of Eindhoven and under the A50, is finally ‘off the paper’. The project was symbolically opened on Tuesday.

In the living lab for innovative building and housing, 119 homes are being built in stages. In the homes, but also in the public space in between, sustainable solutions will be tested in the chain of development, construction and housing. The learning process will consist of testing different materials, shapes and concepts for future construction and housing on an 8,500 square meter plot.

All project partners, including knowledge institutions TU/e ​​and Fontys as well as citizens, will participate in three main trials. An energy balance system must be tested, where more energy-efficient homes can supply power to homes that require more energy. The homes will also be tested for adaptability, to make homes suitable for other, larger or smaller households. Finally, the living laboratory wants to experiment with biofiltration to make the use of water more efficient and reuse it where possible. The latter is not yet allowed.

Of the 119 planned homes, the first ten to fifteen homes will be completed at the beginning of 2023. The living lab starts with a neighborhood quarter, and the city quarter will follow in the 3rd quarter of 2022, where denser built-up concepts will be tested. By the end of next year, around 80 percent of all homes on the site should be built. The first three homes were completed in one year. According to Monique Donker, co-initiator of Living Lab 040, the innovative way they are built quickly saves more than thirty weeks of time.

The homes immediately get a resident who comes from a think tank made up of Eindhoven residents and interested parties from outside the city and even across the border. They will test the housing and other innovations through a ‘squatters’ construction and share feedback. When homes are ‘out of innovation’ or when the living lab is finished, they must look for a new home. ‘The think tank contains different combinations of residents, so we can also test how the homes fit together with the elderly, families or starters.’ 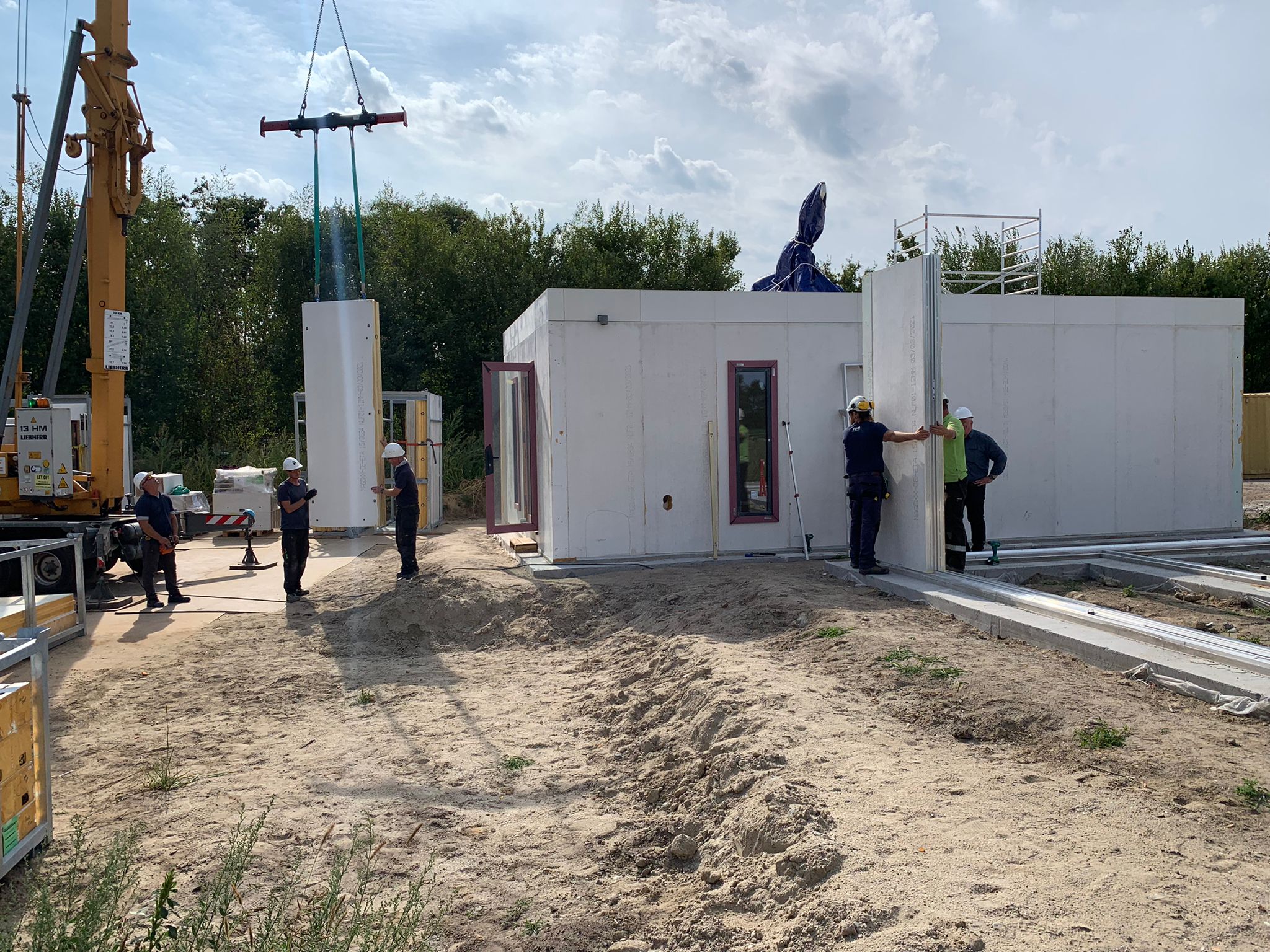 The construction of the first three homes in Ferlem International. Photo: City Affairs

In February 2021, Living Lab 040 signed a cooperation agreement with the municipality of Eindhoven regarding the location and ambitions for the project. “There is deliberately no clear, defined plan. We will work based on trust and five pillars of innovation,’ says Donker. The pillars focus on well-being as a starting point, efficient housing, spatial attractiveness, responsibility and flexibility.

The first three homes to be built will be developed by Ferlem International. ‘I looked at designing more sustainable homes from a high-tech perspective. The entire development team does not come from construction’, says director Berry van Hoof. ‘We keep the quality high and the costs low. Thanks to a simple design, we can easily build industrially with less chance of error.’ According to Van Hoof, his house can be built not only faster than one made of stone, but also faster than half-timbered construction.

Ferlem International’s home shows how the design fulfills the ambition of Living Lab 040. Materials such as hydro-aluminium consist of 40 percent recycled material and with CLT wood, 2.5 times less wood is needed than usual. Thanks to a smart coupling system, the housing can be easily adjusted in size and disassembled. Several homes can also grow together, which will also be tested at the living lab test site.

‘When residents move into our homes, ‘facade cosmetics’ come with them, says Van Hoof. ‘They can then decorate the house with materials such as bamboo, ceramics or by spraying the house with cork.’

A Ferlem home, with an area of ​​80 square meters, will also require significantly less energy: about 3800 KWh, about half of the 6 to 8,000 KWh in conventional homes. Partly because of the energy savings, but also because of the use of materials and the way of building, it is possible to realize the homes just as cheaply.

More construction partners will follow Ferlem International, says Monique Donker. Nothing is known about them yet. Together with living lab, they formulate a research and development agenda for four to five years. In addition to the project’s three main experiments (energy balance, configuration and efficient water use via biofiltration), they also work individually with their own tasks and solutions.

The Living Lab 040 site is largely not yet finished, but there is already a ‘smart energy grid’. Photo: City Affairs

In the bigger picture, Living Lab 040 also looks at the cohesion of all homes. ‘The living lab is not only about the technical history’, says Donker, co-initiator behind Living Lab 040. According to her, the home itself will also be a topic of discussion. ‘How we want to live, from smart use of space to how we can let people live at home for longer. And how we can live healthily, for example by properly ventilating homes or placing them in a certain way.’

To this end, the municipality, the province, developers, construction partners and citizens will cooperate to exchange knowledge and wishes. According to Donker, the living lab is therefore a total solution that focuses on behavioral changes, instead of a series of separate experiments.

And it is precisely these behavioral changes that are important to the success of experimental living. Donker agrees that the living lab will focus heavily on sharing concepts and ownership. Those who want to live in the innovative residential environment will also experiment with shared vegetable gardens, shared transport and other services for the neighbourhood. Councilor Verhees is happy about that: ‘It is worth its weight in gold for the municipality to know how to ensure sufficient social cohesion in densely populated neighbourhoods.’

The land under the A50 will be loaned to living lab for the next fifteen years, after which it can be decided to continue or end the project. Not all construction partners will continue testing for the full fifteen years, according to Donker. It is therefore also possible to end the project earlier: ‘If there is nothing left to innovate, we stop the project’, says Donker.