– walk-in evening in the city centre

– artwork on you temporarily gone

– construction of outdoor areas has started

pastry for 20 years of children’s parade

This year, the little ones are participating for the 20th time in the procession of the 60th Fruitcorso. At the Papesteeg site, the small carts or bicycles could be completed. The interest is less this year. Around 18 creations will participate in 1 round on Saturday 17 September. To celebrate the lustrum, there was cake on Wednesday afternoon. 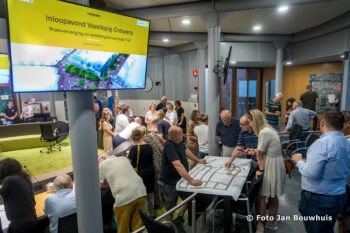 It was busy in the city council chamber on 6 September to see the latest sketches for the renovation of the sewer system and the reconstruction of inner city streets. The visitors were mainly people with businesses in the city center and residents who wanted to see more detailed plans for the municipal design by contractor Heijmans. Those involved in the development and implementation of this huge project for Tiel were busy giving explanations, answering questions and discussing and recording ideas from visitors. In general, the visitors were positive about the plan to replace the sewer system and at the same time make the city center more attractive, less car-free and more climate-friendly through greening. The replacement of the sewer system is necessary because the sewer system cannot drain the water quickly enough during heavy rains.

kunstwerk gets a temporary second place

The well-known artwork “Houses on the dyke” by Cor Litjens on the Waalbanddijken at the dyke’s connection to JM den Uyllaan will temporarily get another place next month. The statue has to go because of the work on the dyke reinforcement. It’s still close. The new temporary location will be the strip of grass near the roundabout 150 meters away in the direction of Passewaaij. After the picture of Flipje, the artwork is a busy photo spot. Many holidaymakers take a picture of themselves or the Waal and the wetlands in the background through the arch.

The ‘Veehek’ on Ophemertsedijk must also temporarily disappear. Stichting Stadsherstel is responsible for the renovation and replacement of the fence.

Groundwork for the construction of two country properties has begun

Between Kruisstraat and Ophemertsedijk, two country properties are being built with a total of eight homes in the higher price range. At the end of August, earthworks started to enable construction. The land was undeveloped agricultural land and used as pasture and a small orchard. A large part of the ground surface (totaling 5 hectares) will remain grass and with trees, including fruit trees, and will have an English countryside feel. To prevent problems caused by seepage, the houses are built on a small mound, a so-called house mound. Part of the estate will be publicly accessible and there will be a (walking) path from Kruisstraat to Ophemertsedijk.

Since 1 October 2021, Talenthouse has been located in the former library on Kloosterstraat. From 1 October 2022, a new location has been found for Talenthouse Tiel. The youth walk-in is moving from the old library to the former ABN/AMRO branch on the Burgemeester Hasselmanplein. Talenthouse Tiel is a place where young people meet and where they can discover their own talents. In the coming months, the municipality will work together with the young people, the welfare organization Mozaïek and other partners on the further development of the Talent House.

The roads are being adjusted

Laan van Westroijen will be adjusted between the roundabouts on Predikbroedersweg and Rivierenland. The plans were finalized after a walking evening and the municipal council has provided more than 2 million. The road is designed in accordance with the rules for sustainable safety.

The new Tielseweg between Rechtbankstraat and Teisterbantlaan will also be adapted. To see these preliminary design plans, there will be a walk-in evening on September 20 at Vergulde Graaf, De Vier Gravinnen. Between 19.00 and 20.00 for the section from Rechtbankstraat to Brugstraat and from 20.00 to 21.00 for the section Brugstraat – Waardenburglaan.

New chairman and secretary of the WMO Council

If the city council agrees, Jan Verkleij and At Sonneveld will support the Wmo council (WMO) as chairman and secretary respectively. The Wmo Council is an important advisory body for the municipality and advises on matters relating to health, participation in society and the Youth Act.