Brussels State Secretary for Urban Planning Pascal Smet confirms that the Brussels Region has granted a building permit to Belfius Insurance for the extensive renovation and conversion of the Pacheco building. The building’s currently deserted plinth will become a dynamic student campus for KU Leuven with an open view of the neighborhood and the city.

The modernist Pacheco building from 1969, which originally housed bank offices and a shopping arcade, has a wonderful new future.

A year ago, Brussels State Secretary Pascal Smet announced together with Belfius Insurance and KU Leuven that they had found a solution to preserve the stately Meyboom building on the corner of Zandstraat and Broekstraat. KU Leuven’s future campus would no longer be located in the Zandstraat, but on the plinth of the Pacheco building, which is owned by Belfius Insurance.

Today, one year later, Pascal Smet, KU Leuven and Belfius Insurance jointly announce that the entire project has now been drawn up and that the Brussels Region has granted planning permission. The remodeling of the building can therefore begin. This makes it an example project on many levels. Clear agreements lead to high-quality projects and thus to an efficient permit process.

“I love it when a plan comes together,” says Brussels State Secretary for Urban Planning Pascal Smet. “This new ‘Living Campus’ is excellent news for Brussels in many ways and combines many of our ambitions. Thanks to a strong collaboration with Belfius Insurance and KU Leuven, we were able to safeguard the stately Meyboom building last year, and now we are giving a wonderful future to another iconic Brussels building. We choose conscious renovation and a design that shows great respect for the original modernist architecture. We make use of the roof by offering a beautiful roof garden overlooking the Botanique. We combine numerous urban functions, so there will be 24/7 activity in and around the building. And we give a huge boost to a neighborhood in full development. In short, a showcase for how we do urban planning in Brussels today.”

“We are of course delighted that the Brussels region agrees with the plans for the site,” says principal Luc Sels. ‘With this transformation, we are also taking a solid step forward in Brussels. The renovation of the Pacheco building gives us the necessary training and research space for the increasing number of colleagues and students who find their way to KU Leuven in Brussels. In addition, we will also use this project to collaborate with our partner universities Odisee and LUCA to focus on new forms of education and work, something for which this area is also perfectly suited.”

Frédéric Van der Schueren, CEO of Belfius Insurance: “With the transformation into a dynamic student campus, we are delighted that the plinth of the Pacheco building will have a beautiful new destination. A destination that once again underlines the social role of Belfius Because it invests in young people, in today’s talents, is investing in tomorrow’s society.”

“At one time, Passage 44 was a popular cultural and commercial hub in the city. After several years of vacancy, the place now takes on a new meaning. The KUL Leuven project is the first in a long line of developments that will breathe new life into stately administrative buildings on Pachecolaan. At the same time, the city of Brussels is working with landscape architect Bas Smets on a master plan to tackle the public space,” says Brussels councilor for urban planning and public space, Ans Persoons.

Belfius Insurance called on the Belgian architectural team a2o-WIT for the architectural design. This team was selected following a public architectural competition organized by Brussels Architect.

The current building will be preserved and upgraded. The now extinct plinth, the former ‘Passage 44’, will have an active function and, unlike today, will be much better integrated into the surrounding public space.

In addition to the renovation and remodeling of the plinth, there will be two new volumes on the plinth, and René Pechère’s famous roof gardens will be restored. 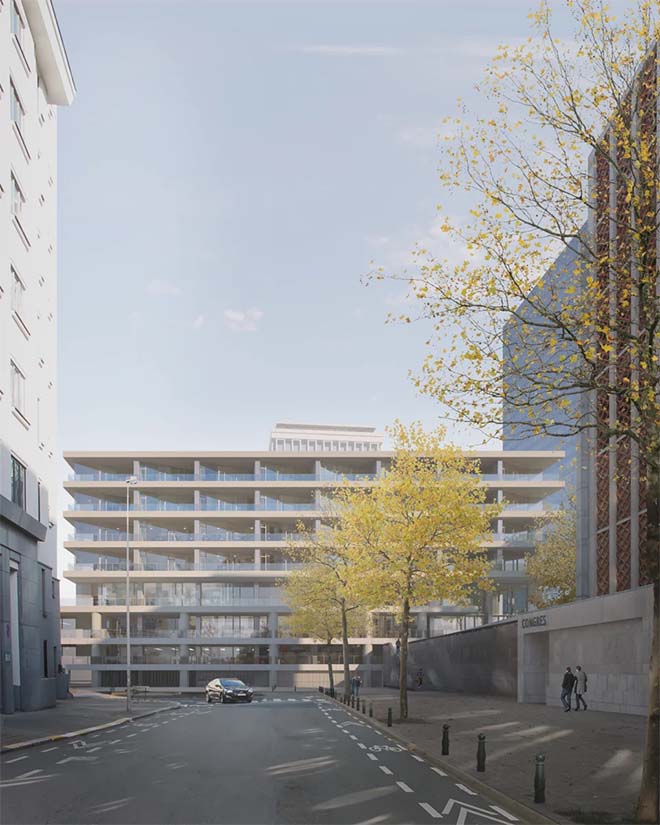 A KU Leuven ‘Living Campus’ in the plinth

The beating heart of the project will be KU Leuven’s ‘Living Campus’ in the plinth of the building. In this contemporary educational and research environment, auditoriums, classrooms, a learning center with library, practice rooms and meeting rooms will be built. Together, they make up a university building of approximately 21,000 m².

The ‘Living Campus’ aims to stimulate and facilitate meetings, and this vision is also reflected in the design. Not only in the design of the interior spaces, but also in the interaction with the surrounding public space. For example, the access to the parking garage on Pachecolaan will disappear, as well as the ‘glass cube’, so much more emphasis is placed on cozy living spaces with trees and plants.

The two volume extensions on the plinth have a total area of ​​approx. 7,000 m². Landscape offices, student accommodation and common dining and living areas can be made available here, among other things.

On the one hand, a new building volume will be realized on Kruidtuinlaan, which will be limited to the space above the current parking entrance. The large open space on top of the plinth is therefore preserved and transformed into an accessible new roof garden, with a view of the Botanical Garden.

The existing volume on the plinth is retained together with the underground Interparking garage in its entirety.

In addition to the attractive ‘Living Campus’ in the plinth of the building, the beautiful roof gardens by René Pechère, including various works of art, including the emblematic work of art ‘The Nine Provinces’ by Jacques Moeschal, as well as the Culot Wall will undoubtedly be eye-catchers for the entire project. 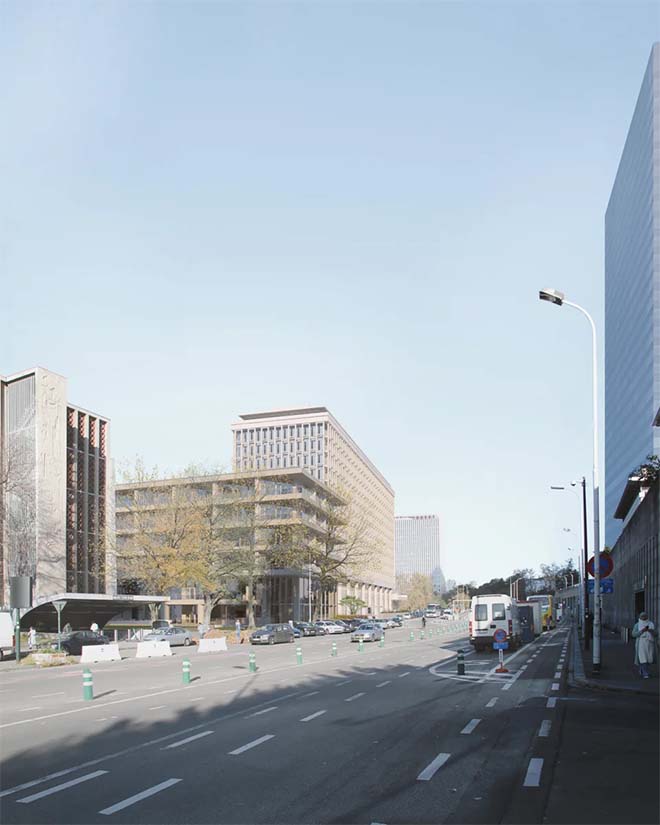 The new KU Leuven campus will not only be located in a very easily accessible location, just think of the Kruidtuin metro station and the Congrès train station, which are located a few meters from the campus, the Nordstationen, the main train station and the city center within. walking distance and the separate cycle paths that are currently being built along the entire inner ring road.

The new campus will also occupy a highly strategic and forward-looking location in the heart of the European capital. Under the impetus of State Secretary Smet, nearby gray Noordwijk will be transformed in the coming years into a lively district with new housing, offices, hotels and restaurants, public spaces, leisure facilities and a new tram line. The presence of KU Leuven and its students, as well as from the higher education partner colleges Odisee and LUCA, will reinforce this metamorphosis, and the interaction with the metropolis will be an important asset for KU Leuven.

In parallel with the development of Noordwijk, landscape architect Bas Smets is currently preparing a master plan commissioned by the city of Brussels to repair the fault line in the north-south rail link and better connect the high and low city.

Thanks to the solution that State Secretary Pascal Smet, KU Leuven and Belfius Insurance found last year, the stately Meyboom building on the corner of Zandstraat and Broekstraat will be preserved. Belfius is currently working on plans for the future of this property.