During the restoration of the KoepelKathedraal in Haarlem, it turned out that several works of art designed for this church were never realized. During the restoration (2010-2018) it was possible to add a few more, and recently stained glass windows by Jan Toorop and glass mosaics by Gijs Frieling were realized thanks to donations. Toorop (1858-1928) created his design over a hundred years ago. The Dome Cathedral is one of the five most important churches built between 1850 and 1950 worldwide, including the Sagrada Familia, Sacré-Coeur and Westminster Cathedral.

The cathedral, designed by Joseph Cuypers, is the second largest Catholic church in the Netherlands after St. John’s Church. The monument has 12 large and small towers and a 65 meter high dome and contains architectural styles such as Neo-Gothic, Neo-Romanesque, Jugendstil and style elements from the Amsterdam School and Berlage. More than 60 artists have worked on it over the past century, including Jan Toorop, Han Bijvoet and Mari Andriessen. But there is also newer art exhibited by, among others, Jan Dibbets, Gijs Frieling and Marc Mulders.

During the restoration, various designs emerged which proved never to have been executed, mainly due to lack of money. De KoepelKathedraal succeeded in realizing part of this. Artists were also engaged to supply the church with contemporary art. For example, stained glass paintings by Jan Dibbets have been placed in the nave and glass panels by Marc Mulders in the baptistery. Gijs Frieling designed the stained glass ‘The Burning Braambos’ and stained glass designed by him was recently installed in the hall at the cathedral’s main entrance.

It was known that Jan Toorop had previously made drawings for the entire Aloysius Chapel in the Dome Cathedral. Of these, however, only his design of tile tableaus was realized. There was no money left for three stained glass windows designed by Toorop. After his death in 1928, the original designs disappeared from view. Until 1989, the designers of two large windows went to auction at Sotheby’s in Amsterdam. They were bought by art dealer Studio 2000 from Blaricum. When the idea arose to carry out Toorop’s work after all, the new owner of the designers was happy to cooperate. In consultation with the glass studio Stef Hagemeier from Tilburg and other experts, the realization was set in motion. During this process, a previously unknown design for the third window emerged. It has now been realized. The financing of the project is made possible thanks to contributions from, among others, the glass studio Stef Hagemeier, donations from private individuals and three foundations.

On the occasion of the completion of the new works of art, a mini-symposium will be held on Friday afternoon, October 21, in the Koepel Cathedral under the direction of Hester Alberdingk Thijm (Director of the Akzo Nobel Art Foundation). Walk-in from 15.00 and start 15.45. During the walk-in, Ton van Eck plays the five organs in the Koepel Kathedraal. After a welcome by Bishop J. Hendriks, Professor P. van den Akker gives a lecture on the creative process in realizing the sketch designs and on the choices that had to be made. This is followed by a panel discussion led by Gijs Assmann with Gijs Frieling, Jan Dibbets and glazier Stef Hagemeier. Organist Ton van Eck also performs the piece Panis Angelicus by César Franck (1822-1890) and (together with Erik-Jan Eradus) the composition Grand Choeur Dialogue by Eugène Gigout. 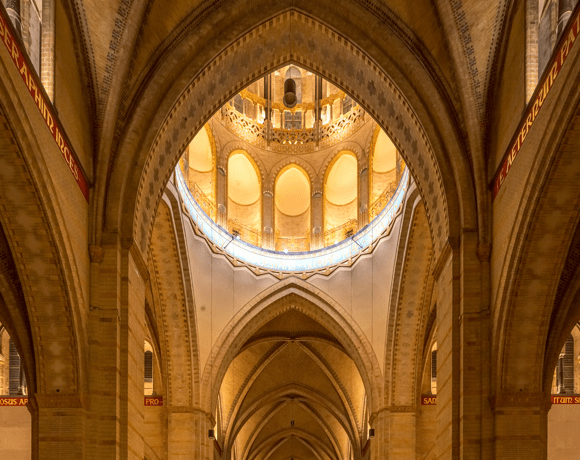 KoepelKathedraal Haarlem KoepelKathedraal Haarlem, also known as Kathedrale Basiliek Sint Bavo, is unique and ranks with Sagrada Familia, Sacré-Coeur, Westminster Cathedral and the Basilica of Koekelberg in the top five of the most important churches in the world that have been built. between 1850 and 1950.…