Most of the major watch releases we see today find innovation in material, size, movement, dial configuration and just the overall design. We see many firsts in the industry, but it is rare that one of the first takes an existing model to great heights.

Housed in an 18-carat Sedna gold case, Omega’s new Speedmaster Chrono Chime was six years in the making. It combines two ancient functions – a minute repeater and a rattrapante – in a single watch.

A split-second chronograph takes the standard chronograph to another level, allowing you to record the ‘interval time’ while keeping the main stopwatch running. The minute repeater and rattrapante are among the most complex watches in existence. They are rare, but until now no brand has combined them both in one watch.

The minute repeater is widely regarded as one of the most complex and difficult complications to produce in a mechanical watch. Combine that with a rattrapante chronograph and you have the most complex watch ever produced by Omega, a watch that combines experience in chronographs, striking mechanisms, sports and the Olympic Games.

The new Omega Chrono Chime models have a special caliber at their core. A watch that connects two important milestones in the life of the brand. Few may know that the first minute repeater wristwatch was made by Omega (then known as Louis Brandt) in 1892. In 1932, Omega also became the official timekeeper for the Olympic Games and released a series of complex and accurate chronograph pocket watches. And if you combine both historical models, you end up with this caliber. 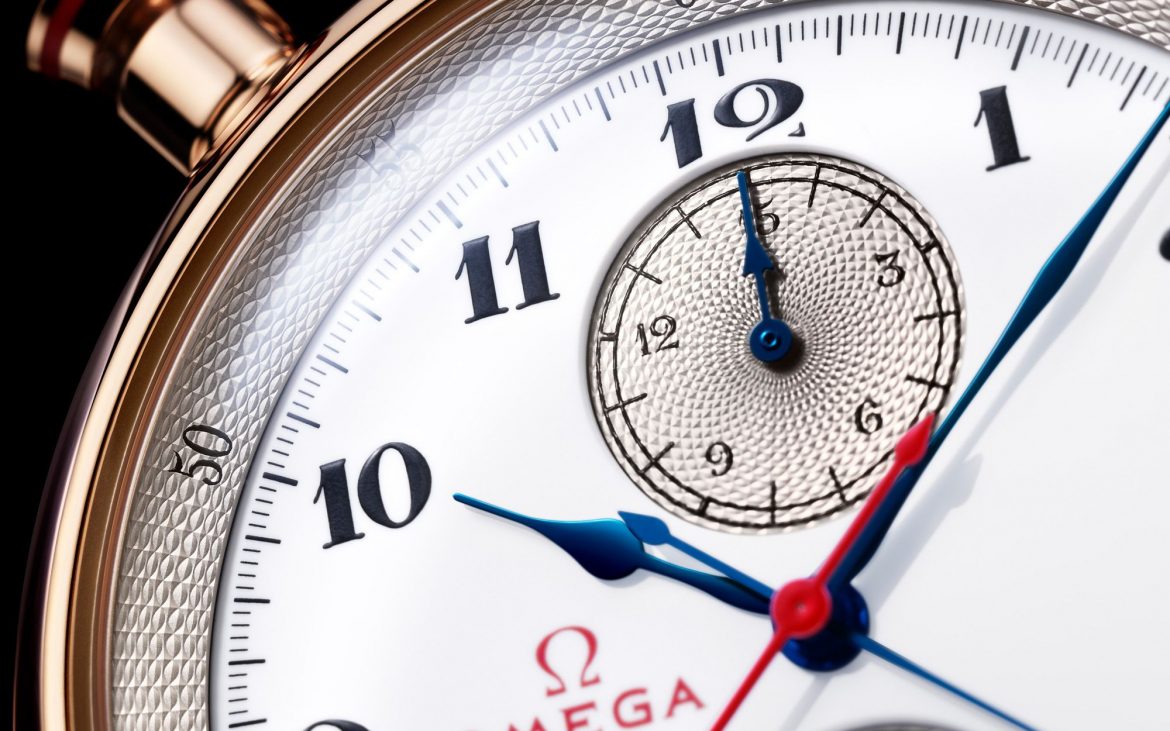 Six years of work and developed in-house with the help of sister brand Blancpain, caliber 1932 was built at Omega’s Atelier d’Excellence, where all high-end watches are produced (tourbillons, historic pocket watches, caliber 321). This innovative timepiece demonstrates the watchmaking skills of the Atelier d’Excellence and introduces several new features.

To begin with, the Omega Co-Axial Master Chronometer caliber 1932 is a fully integrated chronograph and minute repeater and is produced not by adding new parts on top of old ones, changing or modifying them, but by merging both functions into one watch. In fact, it is the most complicated caliber ever produced by Omega. 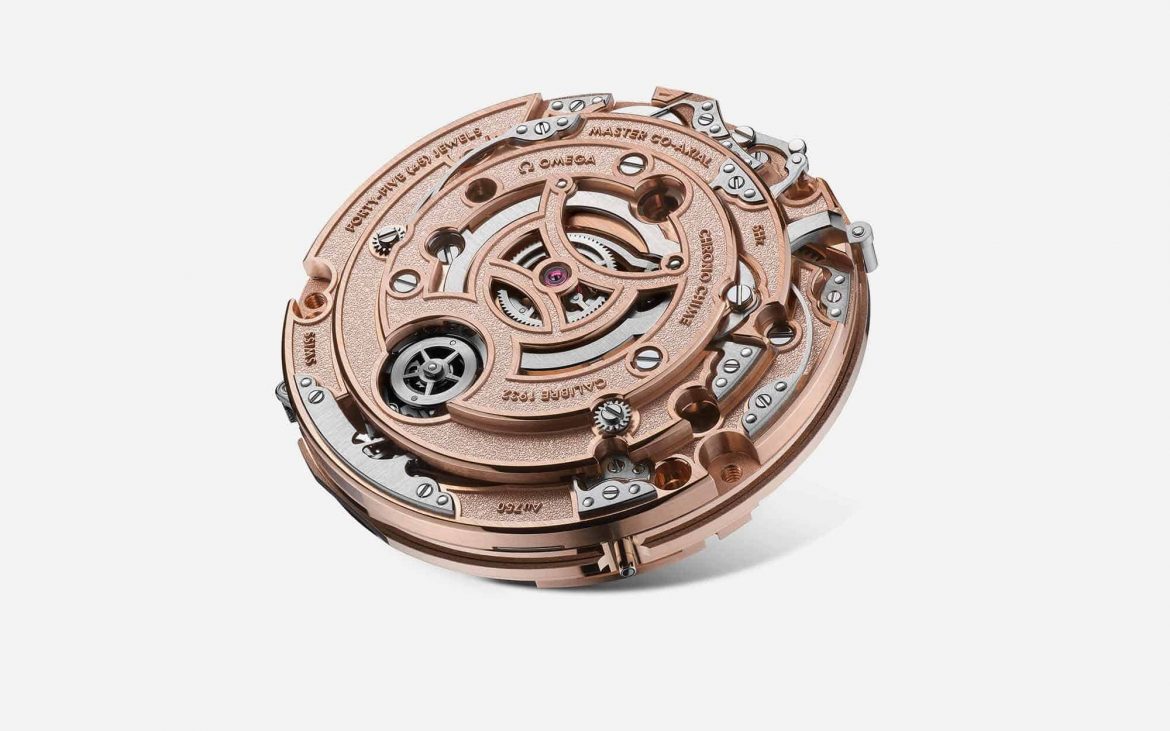 The first challenge was to create a chronograph with an accuracy of 1/10 of a second, which means it had to have a frequency of 5 Hz. Omega watchmakers had to rework the entire escapement design to achieve this higher frequency.

Subsequently, the brand developed a new beat system that ‘reads’ the elapsed time of the chronograph: one for the 15-minute counter, one for the tenths of the current seconds, and one for the second digit of the seconds. As such, the repeater operates on three sequences: a low tone for minutes, a double tone for the ten-second digit, and a high tone for seconds. 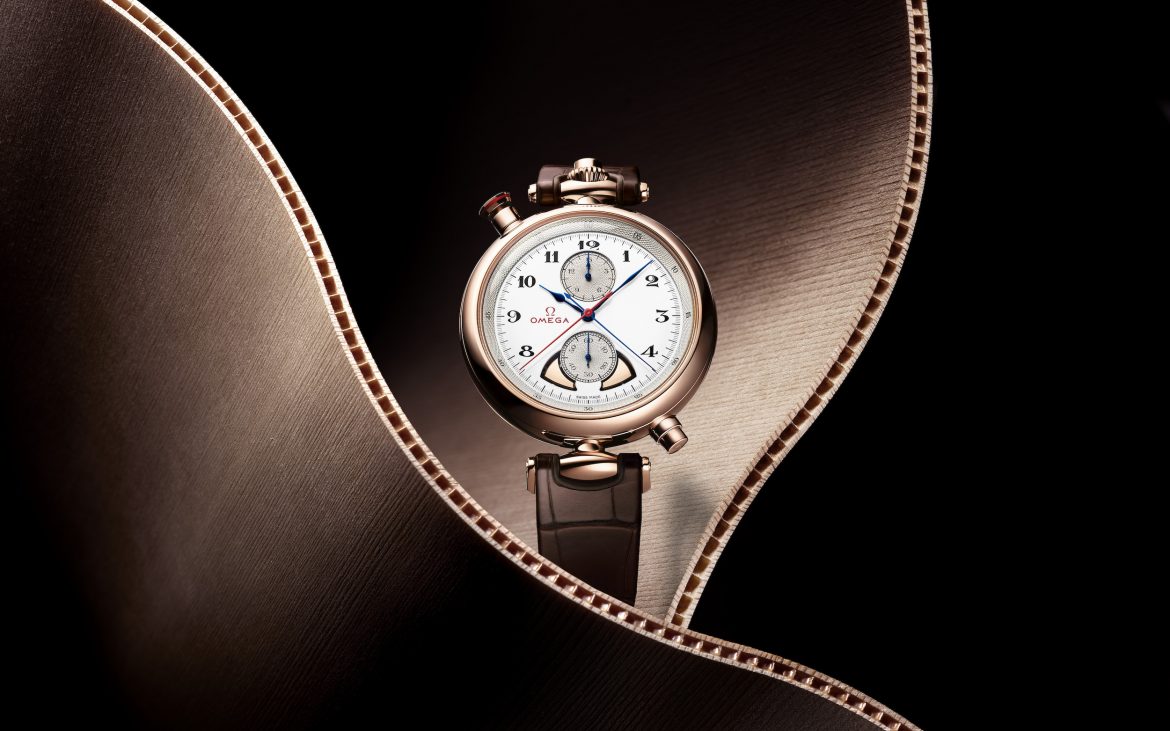 In total, Omega with the Chrono Chime has applied for 17 patents related to caliber 1932, the anti-magnetic technology and the external parts of the watch. To make things even better, the watch and movement have Master Chronometer status, which means the caliber must withstand external magnetic fields of 15,000 gauss, requiring 50 non-ferrous components. And this is now combined with genuine Haute Horlogerie decoration.

For example, the bridges are made of 18 carat Sedna gold with a variety of decorative finishes in two very different watches. 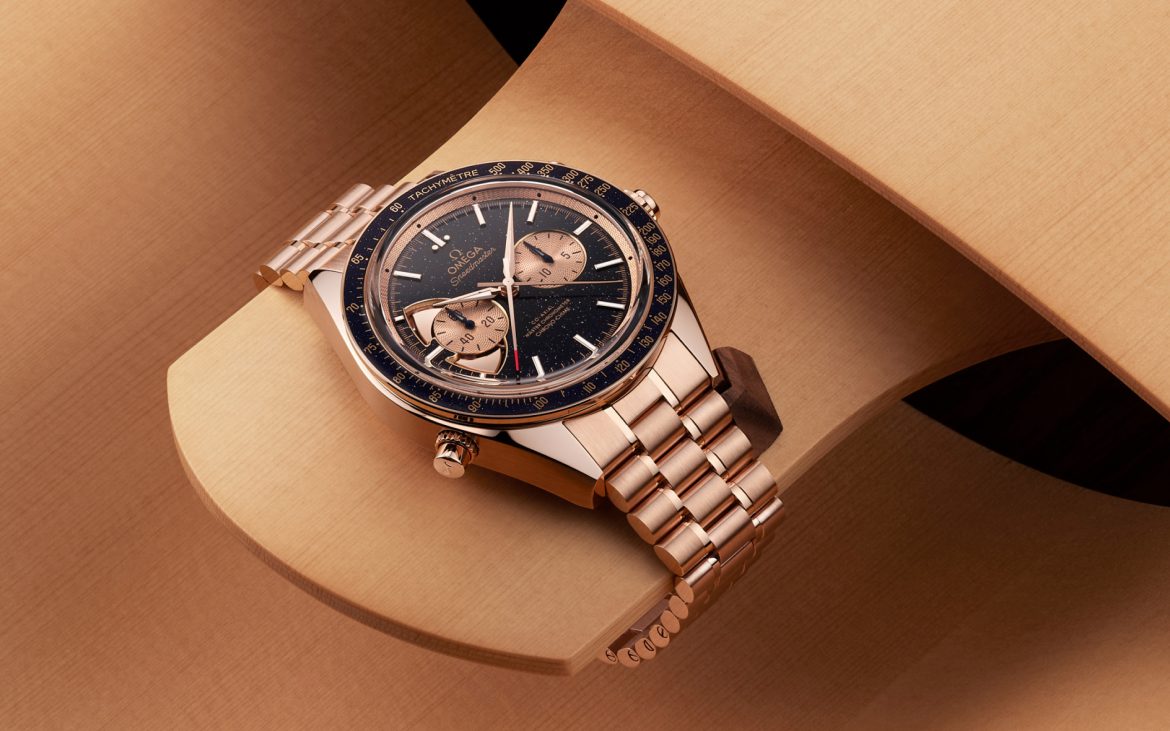 The first of the two special edition models (not limited in number, only by production capacity) pays homage to the past and the watches mentioned above. Shaped like a rebuilt pocket watch with welded lugs, this 18k Sedna gold model combines several traditional techniques. The dial is in Grand Feu white enamel with a handmade guilloche inner ring in 925 silver and subdials decorated with a wave pattern.

The Olympic 1932 Chrono Chime has a diameter of 45 mm and a height of 16.9 mm. It is worn on a brown leather strap with an 18k Sedna Gold buckle and includes a new patented Quick-Change system.

The second watch with the new caliber has the distinction of being the most complex Speedmaster ever made. Inspired by the second-generation Speedy, the CK2998, it combines a number of distinctive Speedy elements with haute Horlogerie accents.

The dial is made of Grand Feu aventurine blue enamel, a patented creation that combines aventurine glass powder with the classic enamel technique. This material can be found on the dial and tachymeter ring. The subwindows at 3 and 9 o’clock are in Sedna gold and have a guilloché wave pattern. The indices and hour and minute hands are in diamond-polished Sedna gold. 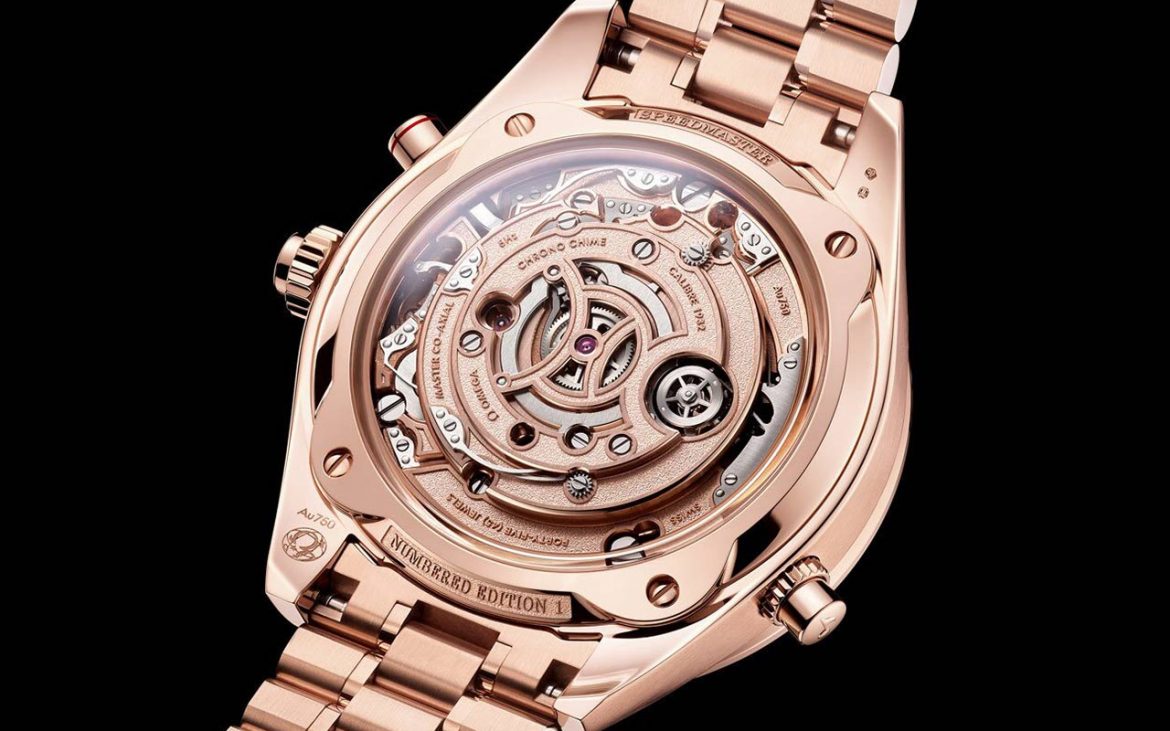 This exclusive Speedmaster Chrono Chime does not have a limited number. It also comes in a walnut presentation box with a spruce soundboard to enhance the sound of the gong function.