The long-awaited redevelopment project The Dome, on the corner of Beursplein and Anspachlaan in Brussels, has been given the green light. The Dome, the name given to the project by the development team VDD Project Development and Vervoordt, will be a 21,000 m2 multifunctional building with retail, restaurants, offices and housing. The design is characterized by its architectural appearance and respect for the history of the building and its surroundings. The integration into the surrounding public space and the various urban functions that will take place there are also crucial in the project. The renovation of this iconic building in the heart of the city will be a milestone in the revitalization of the center of Brussels. 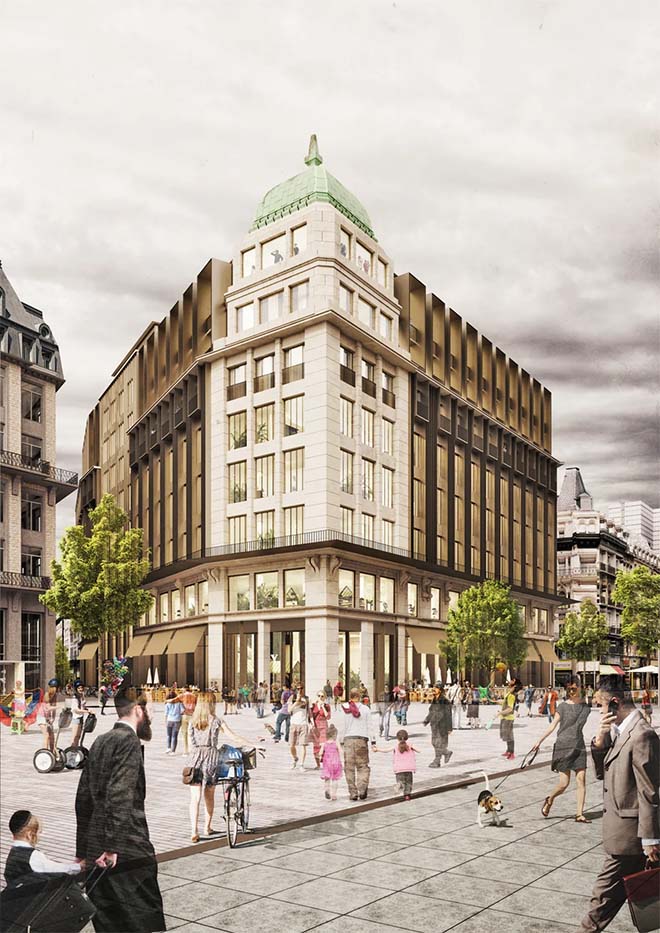 The dome, which refers to the impressive copper roof dome that overlooks the Beursplein, was named ‘Les Grands Magasins de la Bourse’ when it was built in the 1870s and housed Belgium’s first department store. In 1948 the building was heavily damaged in a fire and in 1970 the building was converted into a shop and office building and was named ‘Bourse Centre’. Until a few years ago, Actiris had its offices there.

“The decision to qualitatively renovate the central roads and give them back to the people was one of the best decisions we made in Brussels in recent decades. We are now also seeing the effect of this in the wider environment. Numerous buildings are being thoroughly renovated, bringing a new dynamism to the city centre, just think of the Beursgebouw, the Multi tower, le Grand Café and now also The Dome. We are bringing back the grandeur of the old downtown avenues,”

The Brussels Region sold the building in 2018 with the aim of bringing back the building’s soul and giving the building a multi-functional purpose. MSI, the Brussels Urban Development Company, launched a tender with conditions that the future development of the building had to meet. Sixteen developers applied for this. After a selection procedure involving urban.brussels, Brussels architect, the city of Brussels and MSI, the proposed conversion project by VDD Project Development and Vervoordt re was selected due to its strong vision of a qualitative and sustainable future for the historic building. 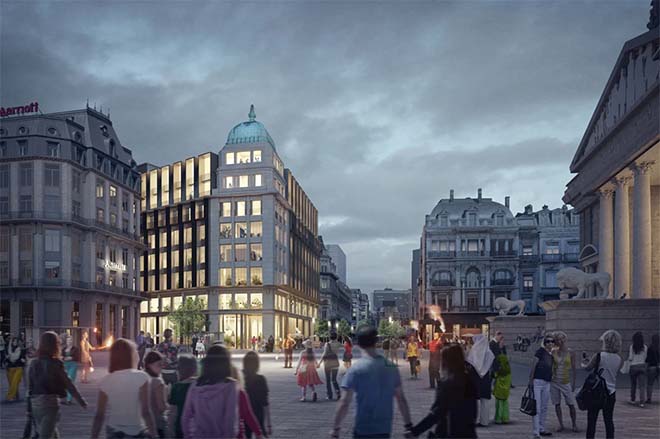 For the project, VDD Project Development and Vervoordt re teamed up with the renowned architectural firm Coussée Goris Huyghe, known for the city library ‘De Krook’ in Ghent, the visitor center in ‘Het Zwin’ in Knokke-Heist and the warehouses in canal’ in Wijnegem. With the project, the team reinterprets the Haussmannian architecture characteristic of Central Avenues and gives the building a strong architectural identity again. The vertical facade elements are emphasized, the mansard roof is replaced by slender dormer windows, balconies are introduced under the roof overhang, the awning gets a powerful design and the historically valuable elements such as the dome are repainted.

“The Dome project will continue the revitalization of the historic city center through an attractive architecture and high-quality program that will determine the experience of the entire environment. The building has a new future, returning to its historical grandeur and reinterpreting Hausmann architecture in a modern way. This contrast ensures that the building has a contemporary identity and that the lighthouse function of the iconic tower with a roof dome is reinforced even more. Thus, a new page has been written in the history of this emblematic place in Brussels, which will become everyone’s meeting place.”

A commercial pedestal with an international character

The plinth of the building opens to the maximum and will interact with the surrounding public space, inspired by the original function of ‘Les Grands Magasins de la Bourse’. The city is drawn into the building, so to speak.

The Italian EATALY will make its long-awaited entry into the Belgian market. The concept extends over the ground floor at the corner of Beursplein, Anspachlaan and P. Devauxstraat, and the entire first floor of a total of 3,500 m2. In this culinary paradise, lovers of Italian food can enjoy the food court concept with restaurants, cafes, Italian fresh food and supermarket and a gym to their heart’s content. Johan Vandendriessche, managing partner in VDD Project Development, has entered into an exclusive joint venture with EATALY for this. An explosive expansion has already brought the chain to cities such as New York, Los Angeles, Sao Paolo, Seoul, Munich, Stockholm, Paris, London, … and now it’s Brussels’ turn.

Delhaize is establishing itself on the corner of Anspachlaan and Kiekenmarkt with a new urban concept on the ground floor and a classic supermarket in the basement of a total of 2,200 m2. 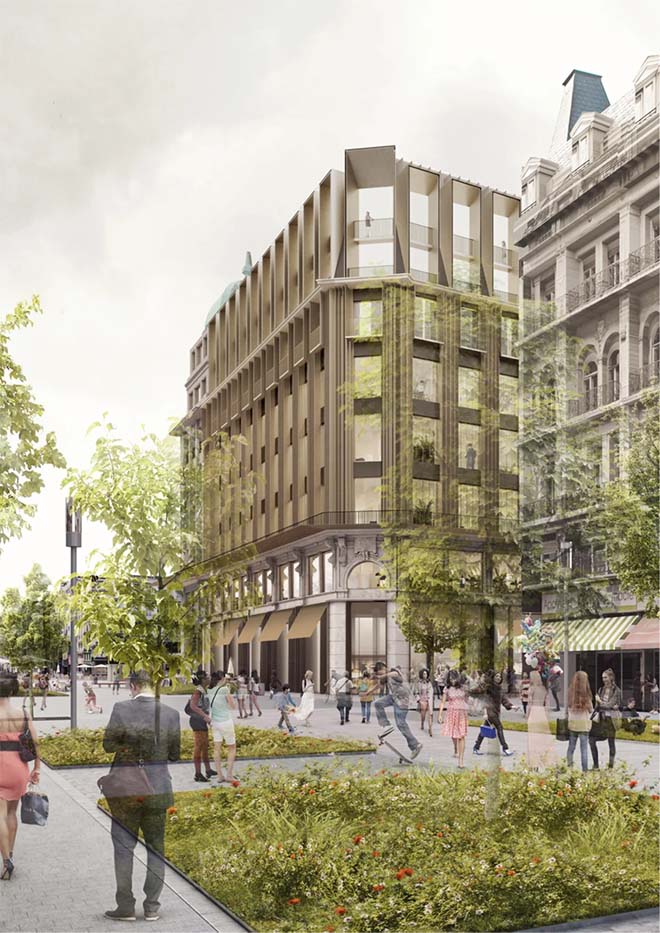 Working and living in the city of tomorrow

On the second, third and fourth floors, 7,500 m2 of state-of-the-art offices will be provided, which will connect to an impressive glass atrium at the heart of the building and a roof garden.

55 rental apartments, between 38 m2 and 105 m2, will be built on the fifth to eighth floor according to the co-living concept. They are smart, compact apartments with an attractive level of amenities and various common areas such as relaxation areas, roof terraces and gardens. Due to rising property prices and demographic developments, the team offers an answer to the ever-growing demand for affordable, sustainable and efficient living.

The Dome is also an exemplary project in sustainability and ecology. In addition to circular construction, various modern and sustainable techniques have been fully adopted, such as solar panels, heat pumps and maximum recovery of the produced heat and cooling to limit consumption to an absolute minimum. Finally, in terms of mobility, we are fully committed to soft road users with 144 parking spaces for (load) bicycles and only 5 parking spaces for shared electric cars. The project aims for a BREEAM Excellent certificate and fully fulfills the ambitions of the Brussels region to deliver high-quality, multifunctional and future-oriented buildings.

“The Dome is a new economic project in the pedestrian street of Brussels. As has already been shown with other property examples, the city center is in full development and more and more investors are choosing our city policy. The city wants to be a constructive partner in this ambitious project. “

The work will start in the first quarter of 2023 and last two to three years. 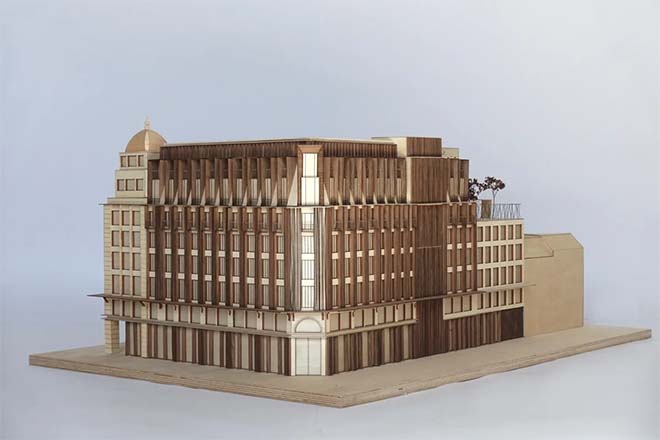