Halloween is a public holiday on October 31. In recent years it has gained more and more popularity in the Netherlands. We have never celebrated that, nor do we live in a neighborhood where the residents participate.
In our region, children carry a lantern with Sint Maarten on November 11 and then collect mountains of candy in exchange for a song.

Many of us know Halloween mainly from American movies.
On 31 October, children dress up and visit the houses in the neighbourhood. These houses are (spectacularly) decorated with pumpkins, lights and very scary figures, sounds or whatever.
The children shout to the houses: trick or treating! Then there is a choice between being scared/teased (trick) or eating something tasty (treat). In recent years, Halloween parties have become increasingly popular in our country.

I think few people know that Halloween actually originates from Hallow-e or All Hallows Eve. It’s All Saints’ Eve: the night before All Saints’ Day, November 1.

For years I read that a Horrorwalk was held in Hoorn. First, a trip where children are usually in costume and meet scary characters along the way. Then there is a tour for adults. For years I saw the scariest and most beautiful face painted people walk by. wearing cool outfits.
Dax was too young for that, so I only looked at other people’s pictures and videos online.

This year he had heard about it and wanted to join.
I asked if he wouldn’t be afraid of the people who go there and maybe scare you a little. None! I really want this mother, he said.
We were a little late to arrange an outfit (cheap).
He no longer fits the standard clothes for children in the cheaper stores.
We were too late to order online. So we had to improvise a bit.

We went to the local party store. It was very busy.
The fake blood was not available and the colored contact lenses were sold en masse.
Dax somehow knows a lot of horror/thriller characters, even though we never watch those kinds of movies together (I don’t like them at all). But he wanted to be Jason Voorhees. He told me that this is a character from the Friday the 13th movie series.
In the shop we saw quite a few masks hanging, also fancy clothes, but it was really too expensive for me. We thought he was going to wear a mask with a black hoodie and black pants and to top it off he chose a plastic knife. 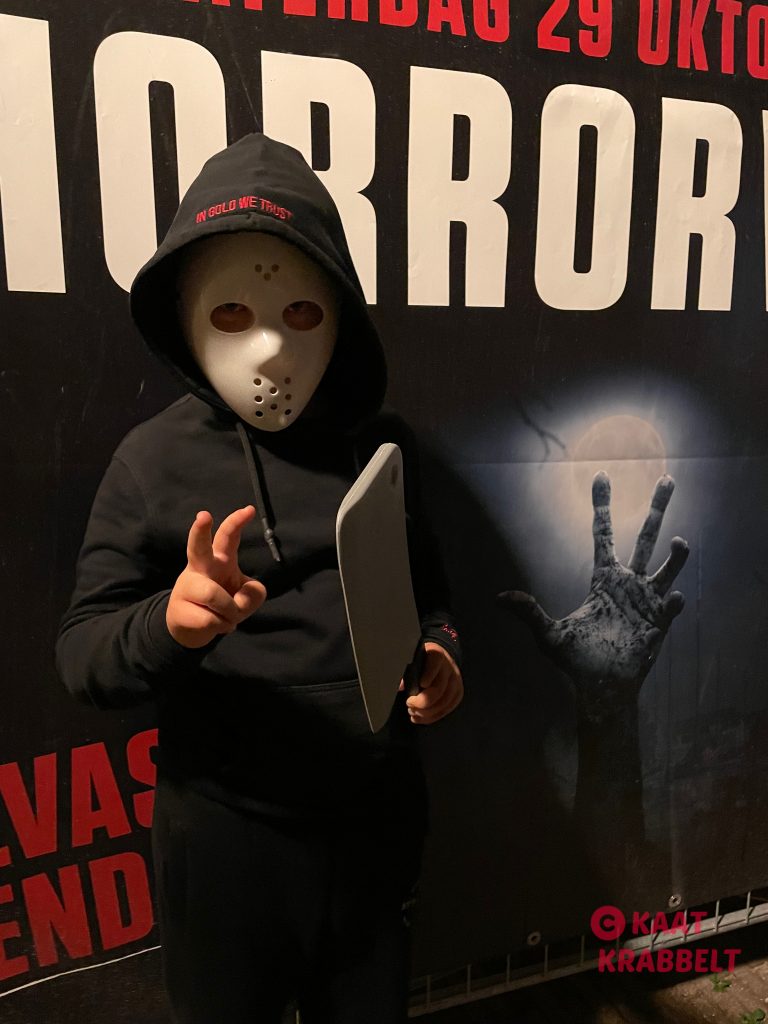 Procession through the center of Hoorn

At 7 p.m., the large crowd of children left the square “De Roode Steen” to walk through the streets of Hoorn’s city center. Many adults accompanying their children had also dressed up.
According to my son, I didn’t have to; you’re already scared of yourself (so cute those kids!).
We passed tough pirates who weren’t really that scary. On the side or in the crowd, sometimes people would come up to you, startle you, or play a joke on you.
It was very possible. When we were walking down an alley and suddenly a woman started ringing a bell very loudly next to Dax’s ear, he was shocked for a moment.
The atmosphere was so relaxed and cozy. Many people addressed Dax as Jason and pretended to be shocked by him. Dax loved it.
On the way there was a DJ playing with scary clips projected on the wall. We went through it pretty quickly and thought we were done in no time… but it turned out a little different.

When we arrived at the main shopping street, we found ourselves in a large crowd.
We stood still for a long time, and then we moved step by step to the alley. The alley we all had to go through to get to the highlight of the evening: the church!
I had a flashback to Queen’s Day in Amsterdam earlier. Stuck in the crowd and feeling a bit oppressive. It took us 40 minutes to get through it.
Kids found it difficult, and especially this mom! I can’t stand still for long with my rotten knee and arthritis. I didn’t show much, but it was an ordeal. I was just wondering if it is worth it for the kids!

Beef in the church

A sort of labyrinth had been made in the church. Laser lights and sounds.
It was so cool, but also exciting.
If you came around the corner they would scare you, there were all kinds of dolls in the chairs.
Someone played the organ, candles are burning everywhere (fake). You could hear the screams of the children echoing in the church, which gave an extra effect.
It was really quite an experience, Dax was once a bit startled by a woman with a kind of bird’s beak who scared people. He also thought it was so cool and a little bit exciting, but I think it gave him a very cool feeling.

Tired but happy after that special night, Dax went to bed when he got home.
We’re going again next year, right? I promised him we would go again.
I’ll make sure to have an empty agenda afterwards, because I’m worthless at the moment with so much pain in my legs and bad suspicion. It was totally worth it to me because this experience together was one you will never forget.

Finally: compliments to the organization of Horrorwalk, all the volunteers and sponsors and everyone else involved. It is great that this is being organised. Despite the scary nature of the theme, the atmosphere was super cozy and cheerful. It creates beautiful conversations, smiles and a kind of brotherhood. Events like this make it so great to live in West Frisia.

News or tips? Corrections or additions? Pictures with the news? Mail to redactie@onswestfriesland.nl, send us a message via Whatsapp 06-49 522 000 or via Facebook @OnsWestfriesland.