The five design visions for the new Stadstheater were presented this week at the Stadstheater in Arnhem. The Center for Architecture and Urban Planning Arnhem (CASA) organized this evening. The assessment committee must now discuss, on 22 December it will be announced which project the municipality will proceed with.

On September 6, five of the nineteen teams that applied for the selection phase were told they could work on a design vision. They were given two months to prepare their ideas. The five teams consist of four design and consultancy disciplines: architecture, installation consultancy, construction consultancy and consultancy within building physics, acoustics and fire safety. The ideas from all five teams can be found in the appendix to this press release.

Councilor for Culture Cathelijne Bouwkamp: “The new City Theater takes shape with these five ideas. Each design is a glimpse into the future of a city theater where Arnhemmers can continue to enjoy art and culture. Each design team has done their best to do our new City Theater justice as much as possible. There will undoubtedly be a design among the five presentations that we can build on.”

The design teams presented their ideas to the judging panel today during the day and in the evening they shared their designs with the city during a special evening hosted by CASA. After tonight’s announcement, the judging committee will consider the choice of the design that forms the basis of the new Stadstheater. The judging committee consists of representatives of Musis & Stadstheater, Arnhem municipality and external experts. On December 22, Arnhem municipality will announce which team will further develop its vision for the Stadstheater.

City theater on Koningsplein and the canal

The renewed Stadstheater is about experience, meeting and connection. A design that recreates the charm of the existing, monumental building. A friendly and elegant new building section of wood and glass encloses a new large hall and connects Koningsplein with the canal via an inner street. The inner street forms the heart of the building, from where you can get everywhere and have a view of everything. The main entrance is located on Koningsplein, under an arcade.

cepezed assumes the greatest possible reuse of the existing building and materials. The new building can be furnished flexibly. A festive element is also added to the cityscape of Arnhem: the great hall gets wavy facade elements that refer to stage cloth. With the latest theater techniques, multifunctional spaces and attention to sustainability, climate conditions and biodiversity – including vegetation inside and outside – the Stadstheateret will soon be ready for the future. 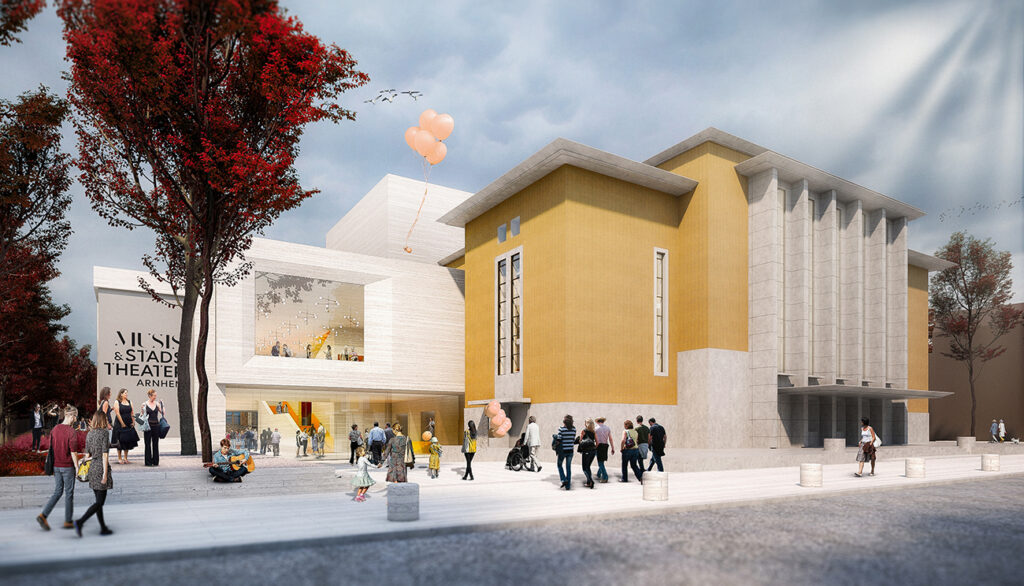 Theater of the Unlimited

The new Byteater transcends boundaries. It weaves the canal into the city and unites park and public. The urban structure in the northern city core is continued, and new public spaces are created. Inside and outside flow into each other.

Unique use of materials and recognizable shapes ensures a coherent sculpture: Here different layers of time, building parts and open spaces meet. And the artist side also has a valid position in the whole: this is how the creators feel at home here.

There is room for every kind of theater experience, both traditional and innovative. Past and future, green and built, noise and silence: this new City Theater may have limits – but softens them.

Everything is possible here. A place like a grandstand. A facade as a panorama. A courtyard that is a hall in the evening and an intimate terrace in the morning. 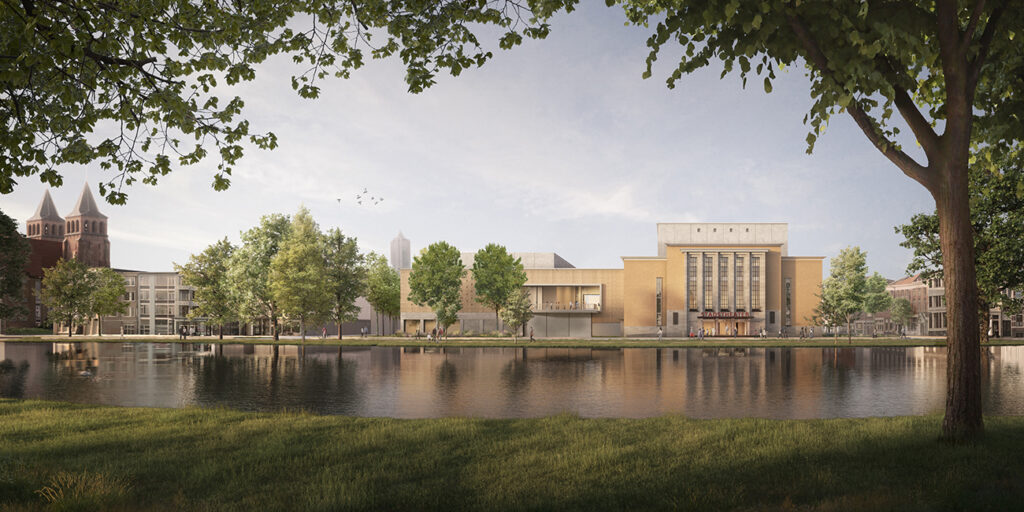 Oasis between city and Singel

Improving contact between Byteatret and the public, the creators, the city and the environment is the main ambition of the vision. There will be accessible gardens around the building, and freight transport will be handled via one central connection from Singel. The extension’s compact and modest design draws attention to the Art Deco monument that is being restored as the main entrance. The new and historic foyers form a lively public interior, where new cultural activities can also be arranged. In addition, the seating comfort and sight lines in the large hall are thoroughly addressed, and materials released from the demolition are used for the realization of a new circular small hall. At Singelparken, a large window with a balcony shows the city what is happening inside, and the building will have a ‘Waal Church foyer’ with another main entrance on the other side. The Stadstheateret thus starts the transformation of the Koningsplein area into an urban oasis.

In our vision, we let the monumental theater building as the main character come into its own again by tearing down the 1970s part. The main character gets a co-player, separate from the old building. Around the two, we draw curtains and wings of recycled and removable bricks, which hide and reveal and play an exciting game between inside and outside, light and dark, open and closed. Between the two building parts, a passage forms the connection between the city and the park, with entrances on both sides. In this way, the building really becomes part of the city: open and accessible to everyone.

In addition to the halls, the new circular and energy-neutral Stadstheater provides space for all sorts of new initiatives and cross-pollination: with different stages inside and out, mirror walls, debate and rehearsal rooms to experience or create art and culture yourself! A seductive and inspiring building that surprises again and again!

Mecanoo architects with Huygen Installatie Adviseurs and ABT bv 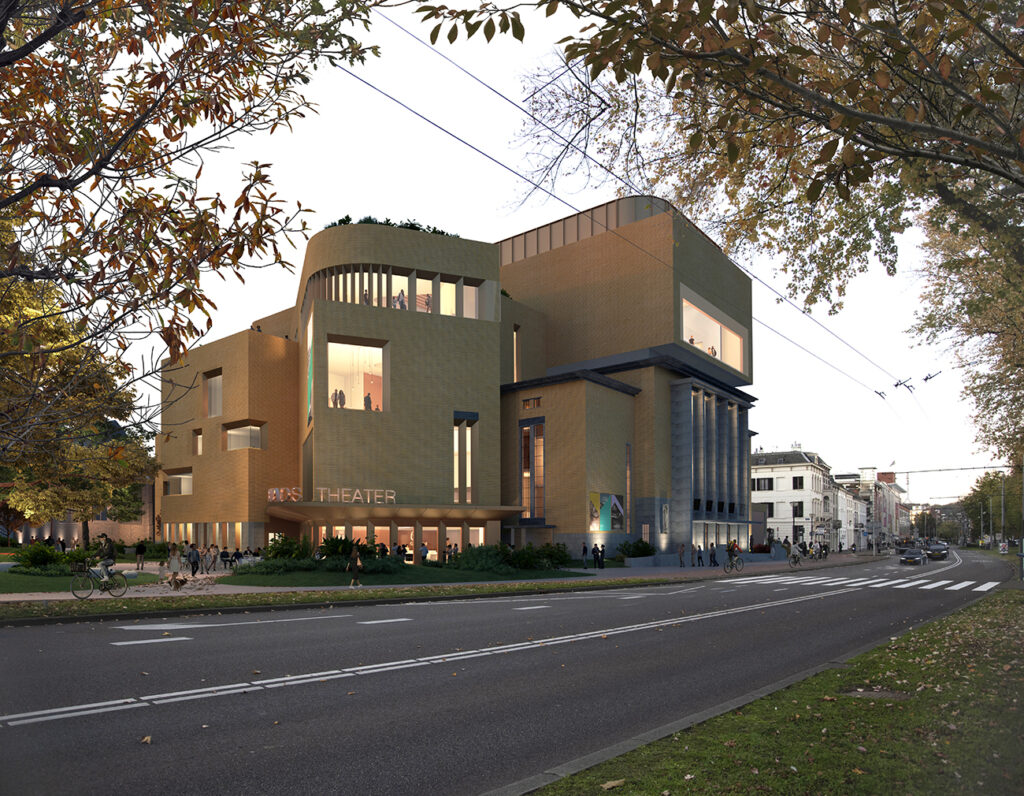 The Stadstheateret is transformed from a closed bastion into a welcoming theater for everyone. It is located as a link between the city center and Musisparken and is surrounded by the lush green Stadsoase. The new program is divided into different volumes that are stacked around the iconic monument. The monument is embraced by the new volumes and forms the heart of the theatre. Each volume has its own programming, orientation and view, so that the theater is activated on all sides. The new open entrance brings visitors to the oasis and the theater together in the Stadscaféen. The flat floor is located in the transformed main hall with a view of Musisparken. As a result, the footprint remains minimal and Stadsoase gets maximum space. The design language with rounded corners is a reference to the art deco style of the monument and creates – together with the recycled brickwork – a unity between old and new.